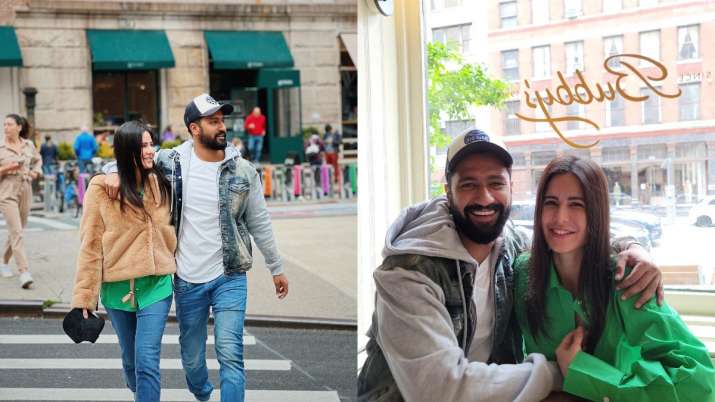 
Katrina Kaif and Vicky Kaushal are one of the hottest couples in the tinsel town and we don’t have any doubts about the same. The duo on Saturday set the internet on fire when they shared a picture from their “me and mine” moment in the pool. While everyone was not done talking about it, they have yet again made our day special with a new set of photos. Taking to their respective Instagram handles, both Vicky and Katrina shared beautiful pictures from their recent getaway. In the same, the lovebirds can be seen having a fun time at Katrina’s favourite place called Bubby’s and relishing some amazing-looking pancakes. Not only this but they even gave us some major couple goals by sharing a glimpse of the moment when they were crossing the streets while holding each other lovingly.

Taking to the photo-sharing application, VicKat shared the set of photos in which they were seen in a casual avatar. Katrina, on one hand, was seen wearing a green shirt with a brown fleece hoody over it. The same was paired with blue denim and a black cap that she carried in her hand. Vicky, on the other hand, opted for a white blue denim jacket with a white t-shirt underneath it. He even paired the same with a pair of denim jeans and a cap.

Katrina while captioning the same wrote, “The Home of EVERYTHINGGGGGG , my favourite place ever Bubby’s.” While Vicky posted alongside, “Sugar rush.”

Coming back to their old pictures, they caught Katrina dressed in a white swimsuit tightly hugging her husband Vicky as they posed for the camera in the pool. While for Vicky, he went for a shirtless look. The couple’s glimpse from their pool time has garnered a lot of likes and comments. “Hotness pesonified,” a social media user commented. “Oh my God! Can’t take my eyes off you guys,” another one wrote.

On the work front, Katrina will star alongside Siddhant Chaturvedi and Ishaan Khatter in the horror comedy ‘Phone Booth.’ She will also be seen alongside Salman Khan in the third installment of the ‘Tiger’ franchise.

On the other hand, Vicky has director Anand Tiwari’s yet-to-be-tiled film in the pipeline. He will also be seen in ‘Govinda Naam Mera’ and ‘The Great Indian Family’.