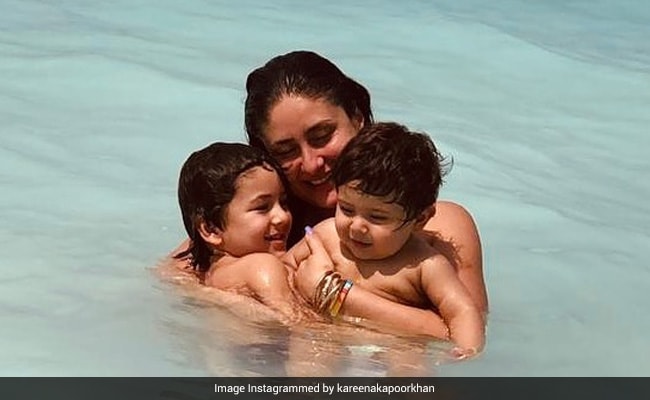 Kareena Kapoor, a mother to two sons – Taimur and Jeh, marked the occasion of Mother’s Day with a super cute picture. She posted a happy picture of herself with sons Taimur and Jeh from their pool time. In her caption Kareena Kapoor wrote: “The length and breadth of my life. Happy Mother’s Day.” The post got a whole lot of love from her friends, family and Instafam, of course. Sister Karisma Kapoor dropped purple and red heart emojis in the comments section. Kareena’s sister-in-law Saba Ali Khan wrote: “Happy Mother’s Day.” Kareena’s friend and designer Manish Malhotra also dropped heart-eyed emojis in the comments.

Kareena also shared a special post for mom Babita, which features Karisma as well. “The reason we are…,” she captioned it.

Kareena Kapoor and Saif Ali Khan, co-stars of films like Omkara, Agent Vinod and Kurbaan, fell in love during the shooting of the film Tashan. They got married in 2012. They are also parents to Taimur, 5. Kareena Kapoor and Saif Ali Khan welcomed son Jeh on February 21 last year. “We have been blessed with a baby boy. Mom and baby are safe and healthy. Thank you to our well-wishers for their love and support,” Saif said in a statement.

In terms of work, the actress was last seen in the 2020 film Angrezi Medium, co-starring late actor Irrfan Khan, and actress Radhika Madan. Kareena will next be seen in Aamir Khan’s Laal Singh Chaddha, which is a remake of the 1994 film Forrest Gump. Kareena shot for parts of the film during her pregnancy.