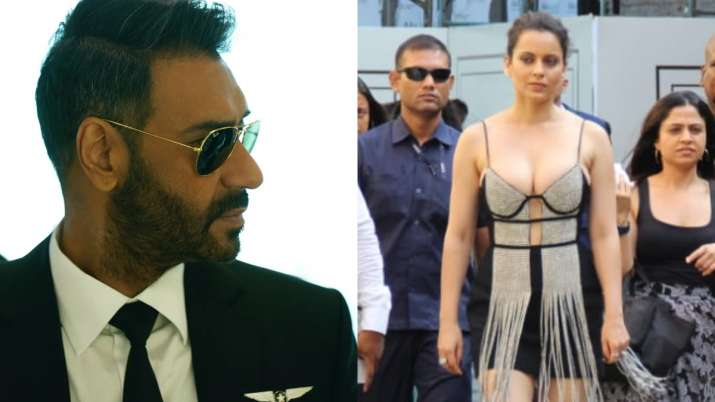 
Kangana Ranaut launched the trailer of her upcoming film Dhaakad on Friday. Her co-stars Arjun Rampal, Divya Dutta and the director of the movie Razneesh Ghai were also present at the event in Mumbai. Press was posing questions to the team and Kangana was asked about the Hindi language row which has erupted after a recent Twitter debate between Ajay Devgn and Kichcha Sudeep. Kangana said that she has no direct answer to this issue but she elaborated her views on it.

“We are a country of diversity, languages and a lot of cultures. It is our birthright to take pride in our language and roots. For our nation to be a unit, we need a thread that runs through it. If we respect the Constitution, they made Hindi the national language. Tamil is actually older than Hindi and even before them, came Sanskrit. If you ask for my opinion, the national language should be Sanskrit. Kannada, Gujarati, Hindi or Tamil, all languages have come from it,” the actress said.

She added, “I do not know why Sanskrit was overlooked as the national language in the first place. If someone says that we don’t accept Hindi, then they are denying the Constitution. Tamilians also had a movement. They wanted a separate nation. When they demand the Bengal Republic, then you are not denying Hindi, you are denying Delhi as the center of the government. There are many layers to this conversation. If you are denying Hindi, you are denying the Constitution and our government in Delhi. The whole country functions in Hindi. German and French people are very proud of their language. No matter how dark colonial history is, fortunately, or unfortunately, English has become the link. Today even in the country, English is the link to communication. A decisive call should be taken on this. In the constitution, Hindi is the national language.”

“Hindi is our national language, so whatever Ajay sir said is right. But I understand the sentiment of Sudeep and he is not wrong either,” she further explained.