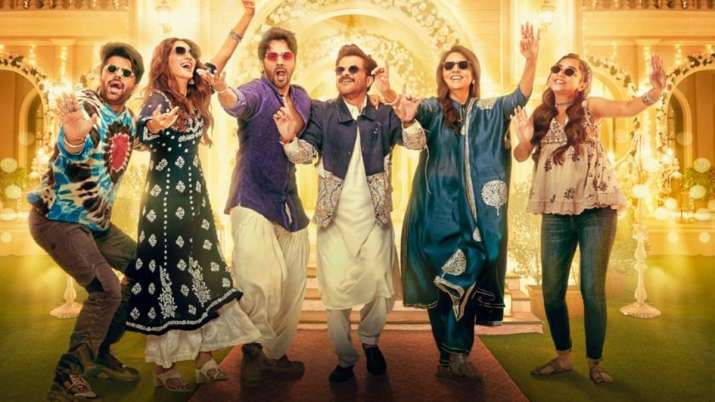 Jug Jugg Jeeyo Box Office Collection Day 6: Raj Mehta’s film starring Varun Dhawan, Kiara Advani, Neetu Kapoor and Anil Kapoor has been receiving a tremendous response. The film released last Friday and is getting love from both the fans and the critics. In its first weekend, it collected a total of Rs 36.93 crore, which is a great figure that a film earned post-pandemic. Despite the fact that the weekday has already begun, the collections have not yet witnessed much drop. Not only this but the comedy-drama is also expected to break many records if it goes at the same pace. In just a few days, the family entertainer will touch the 100-crore mark. On its sixth day as well, Jug Jugg Jeeyo is expected to maintain its pace just like days 4 and 5 and earn around 4-4.50 crores. If it goes by the plan, then the film will hit its half-century as the total would stand somewhere at 50.27-50.77 crores.

Backed by Dharma Production in association with Viacom 18 studios, the film earned Rs 9.28 crore on day one, Rs 12.55 crore on day two, and followed it up with Rs 15.10 crore on day three. On its first Monday, it garnered 4.82 crore while after Tuesday, the collections stood at 46.27 crore. After its sixth day, Jug Jugg Jeeyo will beat the lifetime India collection of Akshay Kumar starrer Bachchan Paandey of Rs 49.98 crores.

Going by a report in Box Office India, “Jug Jugg Jeeyo maintained a good hold as collections were pretty much similar to Monday. The drop mainly cane in the NCR are and some of the other big cities while other areas maintained pretty much similar collections to Monday. The film is holding very well in places like East Punjab, Rajasthan and CI. These places fell around 42-43% on Monday and Tuesday is similar to Monday. The performance over the weekend in these places was not up to the mark but are now holding well.”

Even Karan Johar on Wednesday shared the collections of the film and thanked fans for their love and appreciation. In a post, he wrote, “Strong and steady – your love is sailing us through with flying colours! #JugJuggJeeyo is running successfully in cinemas near you, grab your family and experience this entertainer of the season!!!”

In a matter of three days, the film’s worldwide collection were tremendous. Varun shared the update and wrote, “Dhamaka ji too much naach!!! Thank you for the worldwide #jugjuggjeeyo in theatre now!!!!”

The film is a progressive take on modern-day relationships and follows a family on the cusp of two divorces. The film apart form the above-mentioned actors also featured Maniesh Paul and Tisca Chopra. Varun Sood has a cameo appearance in the film, while social media influencer Prajakta Koli has marked her Bollywood debut with it.