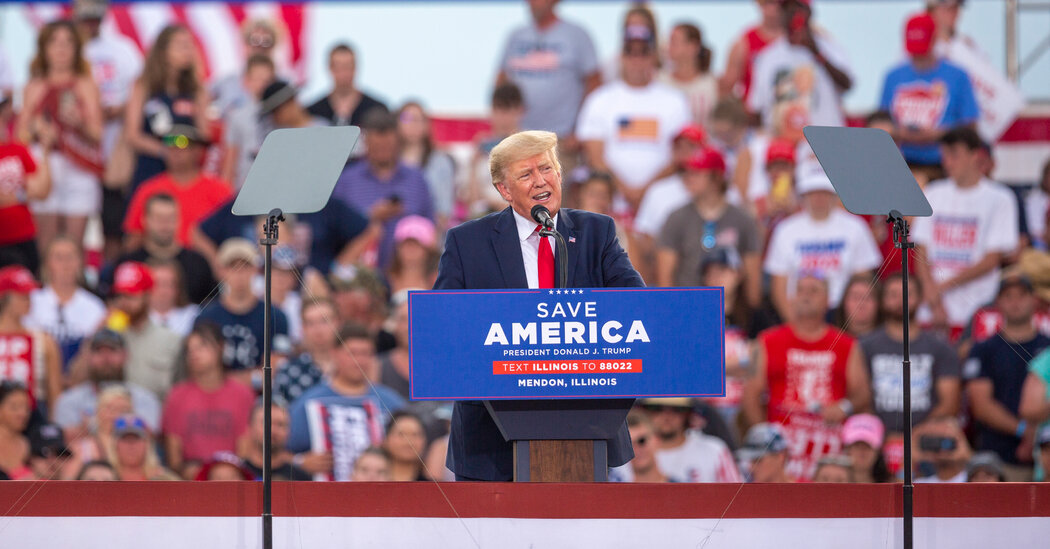 A New York state judge on Tuesday held one of the world’s largest real estate firms — which appraised several of former President Donald J. Trump’s properties — in contempt of court in connection with a civil investigation into whether he falsely inflated the value of his assets.

The judge, Arthur F. Engoron, said the firm, Cushman & Wakefield, had failed to comply with subpoenas from the New York attorney general’s office in its investigation into Mr. Trump and his family business. He ordered the firm to pay a $10,000 daily fine starting on Thursday until it provided the requested documents to the attorney general, Letitia James.

Justice Engoron, who separately held Mr. Trump in contempt in April, chastised the firm for failing to respond to the court’s requests before a deadline earlier this month. “Cushman & Wakefield has only itself to blame if it chose to treat the looming deadlines cavalierly,” Justice Engoron wrote in an order late Tuesday.

A spokesman for the real estate firm said on Wednesday that the company had gone to “great expense and effort” to comply with the subpoenas and would appeal the ruling.

“The ruling to hold Cushman & Wakefield in contempt demonstrates a failure to understand the extreme lengths Cushman has gone to comply with the court’s order,” the spokesman, Michael Boonshoft, said.

The contempt order comes at a critical moment in Ms. James’s investigation into whether Mr. Trump and his family business, the Trump Organization, fraudulently overstated the value of his golf clubs, hotels and other real estate properties in annual financial statements.

Next week, her investigators are scheduled to question Mr. Trump and two of his children under oath, the culmination of the three-year inquiry.

Her office could file a lawsuit against Mr. Trump and the company in the weeks after the interviews, which would accuse them of fraudulently inflating the value of Trump properties to secure favorable loan terms and other financial benefits.

Cushman & Wakefield, which employs 50,000 people in more than 60 countries, was founded in New York more than a century ago and has become of one of the largest real estate firms in the world. Beyond its brokerage services, the company also appraises commercial properties for clients.

The company was hired by the Trump Organization to assess three of its properties at the center of Ms. James’s investigation — the Seven Springs Estate in Westchester County, N.Y.; Trump National Golf Club, Los Angeles in California; and 40 Wall Street in Lower Manhattan.

Ms. James has sought information on those appraisals from Cushman & Wakefield and information about its broader relationship with Mr. Trump.

“Cushman & Wakefield’s work for Donald Trump and the Trump Organization is clearly relevant to our investigation, and we’re pleased that the court has recognized that and taken action to force Cushman to comply with our subpoenas,” Ms. James said in a statement. “No person or company, no matter how powerful, is above the law.”

The firm’s spokesman said that the company had provided “hundreds of thousands of pages of documents and over 650 appraisals” to the attorney general’s office since February. In his ruling on Tuesday, Justice Engoron acknowledged that the subpoenas encompassed voluminous documents but said that state rules allowed for such requests.

Ms. James, a Democrat, has already written in court papers that the Trump Organization’s business practices were “fraudulent or misleading,” but argued that her office needed to question Mr. Trump — as well as his two eldest children, Ivanka Trump and Donald Trump Jr. — to determine which Trump Organization employees were responsible for any misconduct.

Because the investigation is civil, Ms. James can file a lawsuit, but not criminal charges. Still, a lawsuit could deal a significant blow to the former president. If Mr. Trump is found liable at trial, a judge could impose steep financial penalties and restrict the Trump Organization’s operations in New York, at a time when Mr. Trump may well be running for president again.

Mr. Trump, who had to pay $110,000 to have his own contempt order lifted this spring, has denied all wrongdoing and called Ms. James’s investigation a “witch hunt.”

The origins of the inquiry. The investigation started after Michael D. Cohen, Mr. Trump’s former personal lawyer and fixer, testified to Congress that Mr. Trump and his employees had manipulated his net worth to suit his interests.

Contempt ruling. A judge held Mr. Trump in contempt of court for failing to turn over documents to Ms. James, ordering him to provide the records and be fined $10,000 per day until he did so. Two weeks later, the judge withdrew the judicial order on the condition Mr. Trump paid the $110,000 fine he had accumulated over that period.

Justice Engoron had concluded that Mr. Trump failed to fully comply with Ms. James’s subpoena for his personal documents. Mr. Trump was eventually released from contempt, but only after he paid the fine and his lawyers clarified the extent to which they searched his records.

Mr. Trump also fought Ms. James’s effort to grill him under oath, arguing in part that he should not have to answer her questions while he is also facing a criminal investigation from the Manhattan district attorney’s office into some of the same conduct.

But Justice Engoron disagreed, and ordered Mr. Trump to sit for the deposition, a ruling that was upheld by a New York state appellate court.

The criminal investigation had been moving toward an indictment of Mr. Trump early this year until the district attorney, Alvin L. Bragg, developed concerns about whether his office had sufficient evidence to prove that Mr. Trump intentionally misrepresented the value of his properties on his annual financial statements.

Some of the same challenges could arise in Ms. James’s civil case. At a trial, Mr. Trump’s legal team would likely argue that property valuations are subjective, and that any errors were not intentional. They might also note that his financial statements contained numerous disclaimers, including that the property valuations were not audited.

Still, Ms. James appears to believe that she has amassed enough evidence to take action against Mr. Trump. The former president, she said recently, “got caught” using “funny numbers in his financial documents.”