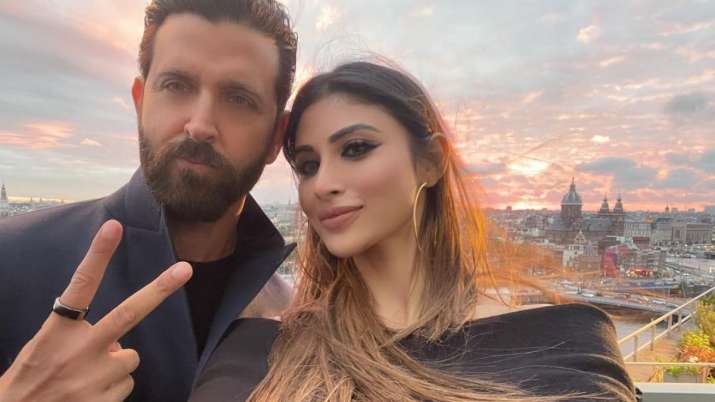 
Mouni Roy met none other than superstar Hrithik Roshan during a special shoot in Amsterdam. The actress, who’s fawning over him in a new social media post shared a glimpse of behind-the-scenes from the shoot. In the picture, the duo could be seen standing beside each other as Hrithik held up a victory sign. Mouni captioned the post, “From an amazing shoot day with this wonderful human.” Both of them were dressed in black and looked really wonderful as they posed against the beautiful European city backdrop.

Mouni and Hrithik exuded fantastic chemistry together. The two collaborated for an ad shoot and with Mouni’s recent post, fans flooded the comment section with fire and heart emoticons, including actor Aashka Goradia, who commented with fire emoticons. Take a look

Mouni will be seen in the upcoming multi starrer movie ‘Brahmastra’ which will be released on September 9.  The film is filled with a stellar ensemble cast also starring Ranbir Kapoor, Alia Bhatt, Amitabh Bachchan and Nagarjuna Akkineni. The final schedule of ‘Brahmastra’ was filmed in Varanasi. The film is a combination of mythology and science fiction, which will be released in five Indian languages – Hindi, Tamil, Telugu, Malayalam, and Kannada.

On the other hand, Hrithik Roshan’s ‘Vikram Vedha’ will be hitting the silver screen on September 30. With Saif Ali Khan essaying the role of Vikram, the Hindi adaptation of the film is poised to become an epic battle between the two stars. The film, which also has Radhika Apte in lead role, the film tells the story of a tough police officer who sets out to track down and kill an equally tough gangster.