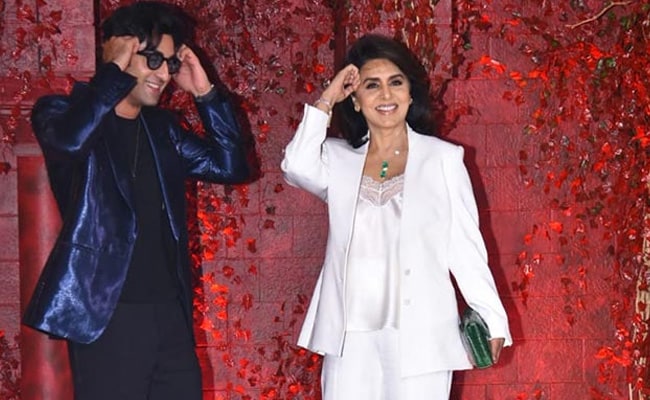 Alia Bhatt had to skip Karan Johar’s 50th birthday party because she’s abroad on work but that didn’t mean her husband Ranbir Kapoor was left without a date. Ranbir, wearing a shiny blue jacket in deference to the dress code of bling, escorted mother Neetu Kapoor, dressed in white,  to the party. Aww. We’ll wait while you grab a tissue. Neetu Kapoor was dressed in white and emeralds and looked fabulous, as she does. Mother and son were super adorable on the red carpet at the party and Ranbir joined Neetu in promoting her new film JuggJugg Jeeyo:

Neetu Kapoor’s JuggJugg Jeeyo co-stars Varun Dhawan, whose mother she plays in the upcoming film, and Kiara Advani also posed together at the party:

Alia Bhatt, who considers Karan Johar her mentor, would have been top of the guest list had she been in town. She flew out of Mumbai a few days ago to begin filming her Hollywood debut Heart Of Stone with Gal Gadot and Jamie Dornan.

Alia wished Karan Johar on his birthday yesterday with a set of pictures, writing: “To the most generous soul I know! To the man who is my father, my best friend and my mentor! (displayed in these pictures respectively) HAPPY 50TH BIRTHDAY K! I pray and wish for only love peace and joy in your life, you deserve it all and much much more for all the light and goodness you bring into people’s lives!!!”

Alia Bhatt and Ranbir Kapoor married in a private ceremony at home in Mumbai last month. Karan Johar was a prominent guest at the wedding, mehendi and other functions.

On the work front, Ranbir Kapoor has several films in his kitty – Shamshera, Brahmastra with wife Alia Bhatt, Luv Ranjan’s untitled with Shraddha Kapoor and Animal.