BISHOPENTERTAINMENT
HomeENTERTAINMENT'Hope he comes to my Lock Upp..': Kangana Ranaut reacts to Will... 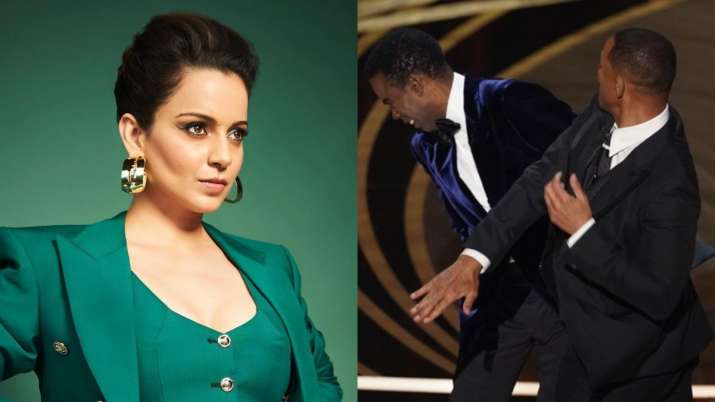 ‘Hope he comes to my Lock Upp..’: Kangana Ranaut reacts to Will Smith slapping Chris Rock at Oscars 2022

The Oscars 2022 ceremony had a slew of moments that would forever be etched in the history of the 94th Academy Awards, and one would surely be Will Smith’s slapping controversy. The internet has been flooded with reactions from all over the world after actor Will Smith smacked comedian Chris Rock in the face during the 94th Academy Awards. Several celebrities from Bollywood and Hollywood have also shared their opinions on the same.

B’town diva Kangana Ranaut also reacted to the incident saying, “If some idiot used my mom or sister’s illness to make bunch of fools laugh I would slap him like @willsmith did…bad ass move..hope he comes to my #lockup”

Earlier, Neetu Singh, Varun Dhawan, Richa and others also dropped their reactions on social media platforms. Neetu Kapoor shared a picture of the much-talked-about moment on her Instagram Story. She wrote, “And they say women can never control their emotions.”

Will Smith slapped comedian Chris Rock onstage after he got miffed at the latter’s joke directed at his wife Jada Pinkett Smith. Several Hollywood stars including Cardi B, Maria Shriver, Trevor Noah expressed their reactions to the onstage scuffle through their social media handles.

Many in the ceremony also looked stunned by the altercation. As per Variety, Rock appeared on stage to present the Oscar for documentary feature and he then made a joke about Jada-Pinkett Smith (Will Smith’s wife) being in ‘G.I. Jane’ because of her shaved bald head.

Last year, Jada Pinkett Smith had announced that she shaved her head after struggling with alopecia. Initially, Smith was laughing but Jada clearly looked affected by the joke. Smith then took to the stage to punch Rock. A few minutes after the incident, Smith was announced Best Actor at the Oscars. And during his acceptance speech, he apologised for his behaviour.