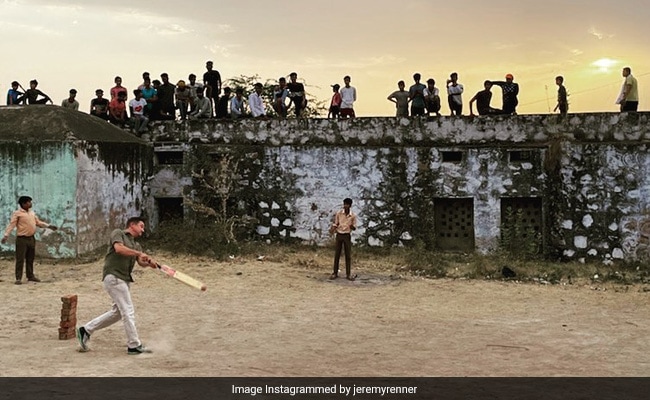 The children of Alwar, Rajasthan, enjoyed a game of gully cricket on a warm summer day recently. Nothing unusual about this except that they had a superhero in their midst. We are talking about Avengers star Jeremy Renner who is currently in India and joined the kids in Alwar for a game of cricket. Jeremy, who plays Hawkeye in the Marvel Cinematic Universe (MCU) as well as the eponymous show shared a picture of him enjoying cricket with the boys. In the image, Jeremy is seen batting on a regular neighbourhood ground with bricks as wickets and a crowd of youngsters watching him in action from atop a wall.

Jeremy Renner is dressed in a military green shirt and beige pants in the image. In the caption, he said, “What a blessing of life to discover, learn and be inspired by people and places across this planet.” His geotag pointed to Alwar City in Rajasthan.

Replying to the post, comedian Katie Cazorla said, “You are a treasure.”

Several fans of the actor also welcomed him to the country in the comments section.

Last week, Jeremy Renner landed in Delhi and shared a video from a luxury hotel that he is staying at. In the clip, the actor was welcomed with a bunch of sweet goodies inspired by the MCU. The platter included  Captain America’s shield, Iron Man’s helmet, Hawkeye’s bow and arrow, and Hulk’s green fist. But what caught Jeremy’s attention was a tiny teddy bear that was a part of the goodie bag. In the caption, he said, “Another avenger added …. Name and superpower please?”

The 51-year-old actor has not revealed whether his visit to India is in a personal or professional capacity.