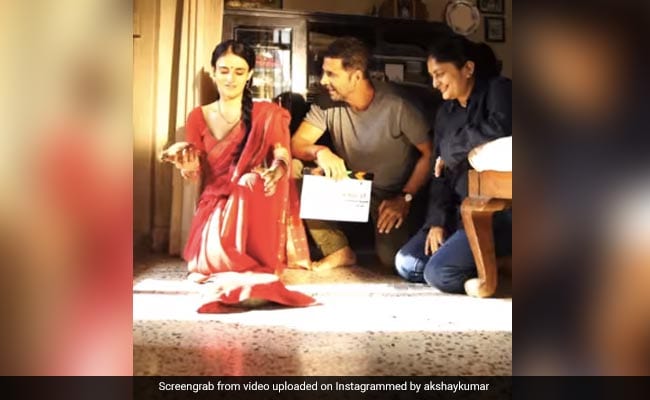 The Hindi remake of the Tamil superhit Soorarai Pottru has been in the news over the past months with several big names reportedly eyeing the lead role. Now, it has been confirmed that Akshay Kumar will headline the cast in the remake alongside actress Radhika Madan. The shoot of the film has begun, the actor revealed in a new video. The clip shows the film’s director Sudha Kongara and Akshay Kumar watching as Radhika Madan breaks the ceremonial coconut ahead of the commencing of the shoot. Making fans a part of the journey, Akshay Kumar asked his social media followers to drop suggestions for the title of the film, adding that they had not zeroed in on any name so far.

Sharing the video, Akshay Kumar said, “With the auspicious coconut-breaking and a small prayer in our heart, we begin the filming of our yet untitled film which is about dreams and the power of it. In case you’ll have any title suggestions, do share and of course your best wishes.” In the video, Akshay Kumar is seen patting Radhika Madan on the back after she manages to crack the coconut open.

In the post, Akshay Kumar also tagged Captain G.R. Gopinath, the founder of Deccan Air, whose life inspired the film. The original Tamil film was also directed by Sudha Kongara. The Bollywood star also tagged actor Suriya, who played the lead role in the original and also produced the film along with his wife Jyotika and Rajsekar Pandian under their banner 2D Entertainment.

In addition to Suriya, Soorarai Pottru features Aparna Balamurali, who played the character based on G.R. Gopinath’s wife Bhargavi. Actor Paresh Rawal also plays a pivotal role in the original that received widespread critical acclaim. The film took inspiration from the events of G. R. Gopinath’s life as has been described in his memoir Simply Fly: A Deccan Odyssey.  Though the film was planned for a theatre release two years ago, in light of the COVID-19 pandemic, it had a direct-to-digital release on Amazon Prime Video on October 30, 2020.

The film had also joined the Oscar race in 2021 under General Category in Best Actor, Best Actress, Best Director, Best Original Score, among other lists.

With this film, Akshay Kumar has a host of diverse upcoming projects including Prithiviraj, Raksha Bandhan, Ram Setu, OMG 2 – Oh My God!, and Selfiee, among others.