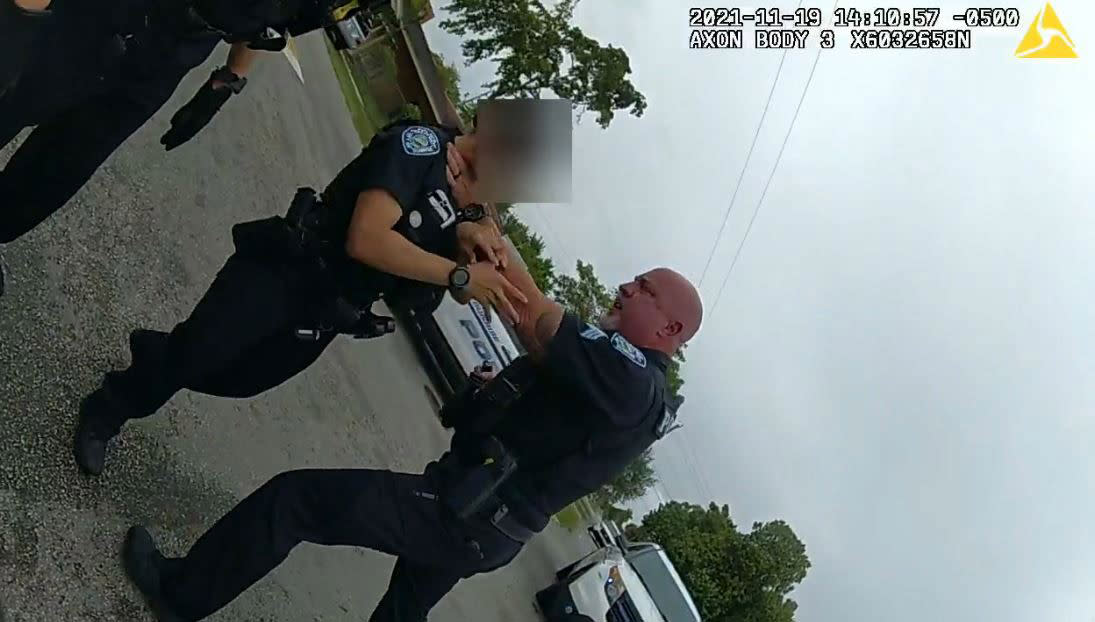 A Florida police sergeant who was seen in body camera video grabbing another officer by her throat last year was charged with battery and assault on a law enforcement officer, officials said Thursday.

Christopher Pullease, 47, was also charged with evidence tampering and assaulting a civilian during the Nov. 19 incident, the Broward State Attorney’s office said in a statement.

Pullease, who was relieved of his supervisory duties in January, was accused of “intentionally touching or striking” the female officer against her will and assaulting her when he held pepper spray to her face, the statement said.

The assault charge against the civilian, who was being arrested on what authorities described as a violent felony when the incident occurred, was prompted by Pullease holding the spray to the man’s face, the prosecutor’s office said.

A probable cause affidavit obtained by the South Florida Sun-Sentinel accused Pullease of trying to “impair” his cellphone for his use in a criminal trial.

In the video, which was muted and blurred by the police department to protect an internal investigation, Pullease can be seen appearing to talk to the suspect, who is handcuffed and in the back of a patrol car.

The female officer can be seen approaching him and grabbing his duty belt in an apparent attempt to pull him away, according to Sunrise Police Chief Anthony Rosa.

The video shows Pullease wheel around and briefly grab the officer by her throat while pushing her backward into another patrol car. He does not appear to deploy the pepper spray.

In a January statement, Rosa said the sergeant, who he did not name, arrived at the scene and approached the suspect, who Rosa described as “verbally and physically resistive.”

Pullease “approached and engaged in a verbal altercation with the suspect in a manner that I feel was inappropriate and unprofessional,” Rosa said. “This supervisor escalated the encounter instead of de-escalating an emotionally charged situation. It is our practice at the Sunrise Police Department to do everything we can to deescalate tense incidents and bring calm to chaos.”

Rosa also praised the female officer, noting that she was acting in accordance with department policies that call for intervention when there is an “imminent fear of engagements escalating unnecessarily.”

Rosa did not immediately respond to a request for comment Thursday and a message left on a phone number listed under Pullease’s name was not immediately returned. It wasn’t clear if he has a lawyer to speak on his behalf.

The local chapter of the Fraternal Order of Police also did not immediately respond to a request for comment, but in a January statement obtained by a Florida TV station, WSVN, the union’s president denounced Rosa for “publicly ridiculing” Pullease while an internal probe was underway.

Pullease’s status at the department wasn’t immediately clear. If convicted, he faces five years in prison on the felony battery charge and five years for evidence tampering. He faces one year for the assault on an officer charge and 60 days for assault on a civilian.

- Advertisement -
This post contains affiliate links. If you use these links to buy something we may earn a commission. Thanks.”
Facebook
Twitter
Pinterest
WhatsApp
Previous articleAdhyayan Suman: I have been through a phase where I wanted people to support and believe in me – Exclusive | Hindi Movie News
Next articleKoffee With Karan 7: Samantha Ruth Prabhu On How Life Changed