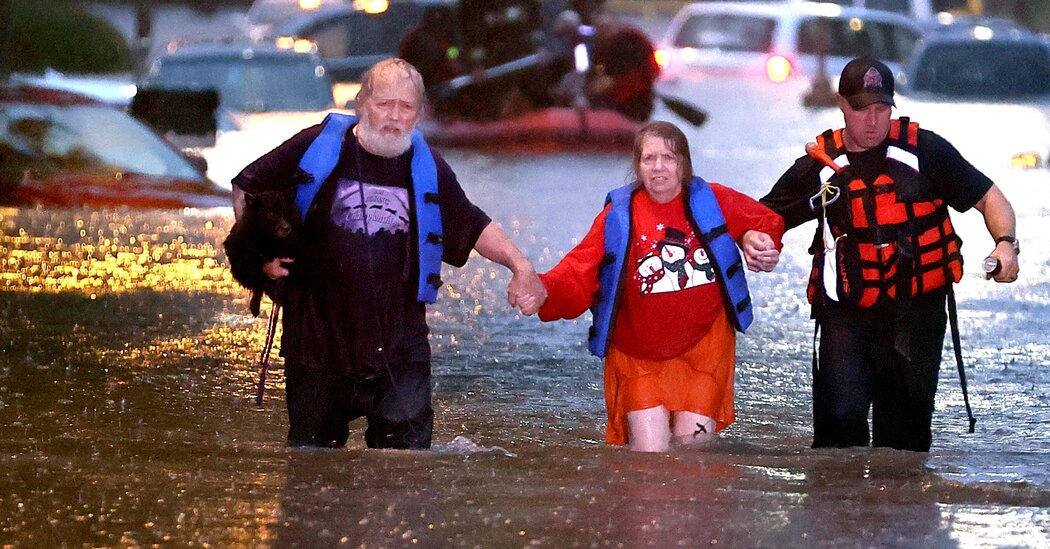 Just three days ago, the River Des Peres, which carries storm water from the city of St. Louis, was “almost bone dry,” the city’s fire chief said, as Missouri experienced what the governor called increasingly dry conditions and the growing threat of serious drought.

Then came record rainfall early Tuesday, drenching parts of St. Louis and other areas of Missouri with up to a foot of rain that quickly transformed interstates and neighborhood streets into roaring rivers that collapsed roofs and forced residents to flee their homes in inflatable boats.

While officials worked to assess the full scope of the damage, Chief Dennis M. Jenkerson of the St. Louis Fire Department said at a news conference on Tuesday that one person who had been pulled from a flooded vehicle had died. There was about 8.5 feet of water in the area, he said.

Firefighters had helped or rescued about 70 residents, he said. Property damage was “very significant” in some hard-hit areas, he said, including one in the southwestern part of the city where 14 or 15 homes had experienced “significant flooding.”

“We’ve had a tremendous amount of cars that have been door-deep and also roof-deep in some of these low-lying areas,” Chief Jenkerson said. “Now, we’re seeing the weight of the water cause some issues with buildings. We’re having some partial roof collapses. Some of the vacant buildings are also suffering from the stress of this water.”

The flash flooding was only the latest entry in what seemed to be an unceasing onslaught of extreme weather disasters, with ferocious wildfires, punishing heat waves, crippling droughts and deadly floods in the United States and across the globe.

While a variety of factors contribute to flooding, researchers expect that, as the climate warms, flash floods will increase and get “flashier,” meaning their duration will shorten as their magnitude increases. Severe flash floods can be more dangerous and destructive.

The St. Louis area also flooded nearly three decades ago, when the Mississippi and Missouri rivers swamped villages and farmland during a two-month inundation that came to be known as the great Midwest flood of 1993. That flood claimed 50 lives across the region, left almost 70,000 people homeless and caused an estimated $12 billion in property and agricultural damage.

City officials said they were not sure how many people had been displaced in Tuesday’s storm, but Jim Sieveking, a meteorologist with the National Weather Service in St. Louis, described the flash flooding as “catastrophic” and the rainfall as “historic.”

More than nine inches of rain fell in the St. Louis area overnight, the highest 24-hour rainfall total on record there, the National Weather Service said. It surpassed the 7.02 inches that fell in 1915 from the remnants of the Galveston hurricane. The normal amount of rain in St. Louis for July and August combined is 7.31 inches.

By Tuesday morning, 10 to 12 inches of rain had fallen in parts of eastern Missouri, the National Weather Service said. The largest total was 12.34 inches in St. Peters, northwest of St. Louis, the agency said, noting that rain continued to fall.

The flooding shut down more than two dozen sections of major roads that crisscross the St. Louis area, including Interstate 170, a beltway that runs north and south, and Interstate 70, which runs east and west, the state Department of Transportation said.

At least four state highways and several other major roads were also closed, the department said.

Many drivers founded themselves stranded, including a crew from a local NBC affiliate, KSDK, whose vehicle stalled at the bottom of a flooded exit ramp on Interstate 70.

“I would have never anticipated that we would be in that situation,” Sydney Stallworth, a KSDK reporter, said in a report after members of the Pattonville Fire Department rescued the news crew and took them to a fire station. “You just don’t know how deep the waters are,” Ms. Stallworth added.

The first significant call for help in St. Louis came at about 3 a.m., from someone reporting an electrical issue in the rain-soaked subbasement of the main post office building downtown that was “causing a significant amount of smoke,” Chief Jenkerson said.

From there, firefighters and other emergency workers responded to a flurry of calls, as they identified and blocked flooded roadways and rescued people from flooded homes. But the swiftness of the rising floodwaters was a challenge.

“This has been a storm that came on very quickly,” Chief Jenkerson said.

One couple who didn’t want to leave their home had to be rescued about an hour after they were trapped in their attic, he said. City officials said that a regional shelter had been set up with the help of the American Red Cross.

The heavy rains caused the Coldwater Creek to flood an apartment complex in Hazelwood, Mo., northwest of the city in St. Louis County. Dozens of firefighters used four boats to evacuate hundreds of residents, said Chief Dave Herman of the Hazelwood Fire Department.

By early afternoon, “we have almost evacuated all of them,” he said. Chief Herman said there was only minor injury to a firefighter during the rescue, “which is very fortunate.”

Dan Head, the owner of Luna Builds, a general contractor in the hard-hit southwest section of St. Louis, said the River Des Peres, which runs right behind his business, had flooded with a surge of water 30 feet deep and 100 feet wide, “ripping through like the Royal Gorge.”

“You can hear the water, the sound of it,” he said in a telephone interview. “It sounds like the power of God. It’s a creepy feeling, honestly.”

Gov. Mike Parson of Missouri, who was on an international trade mission in Germany, said he had been monitoring the rainfall in the St. Louis area from afar on Tuesday.

He and the lieutenant governor declared a state of emergency on Tuesday. Mr. Parson thanked emergency workers and said the Missouri State Emergency Management Agency and the Department of Public Safety were working with local agencies to provide support and assistance to residents.

“We urge Missourians to continue to follow the safety messaging of local authorities and avoid travel in flooded areas until floodwaters recede,” he said in a statement. “Never attempt to drive in floodwater.”