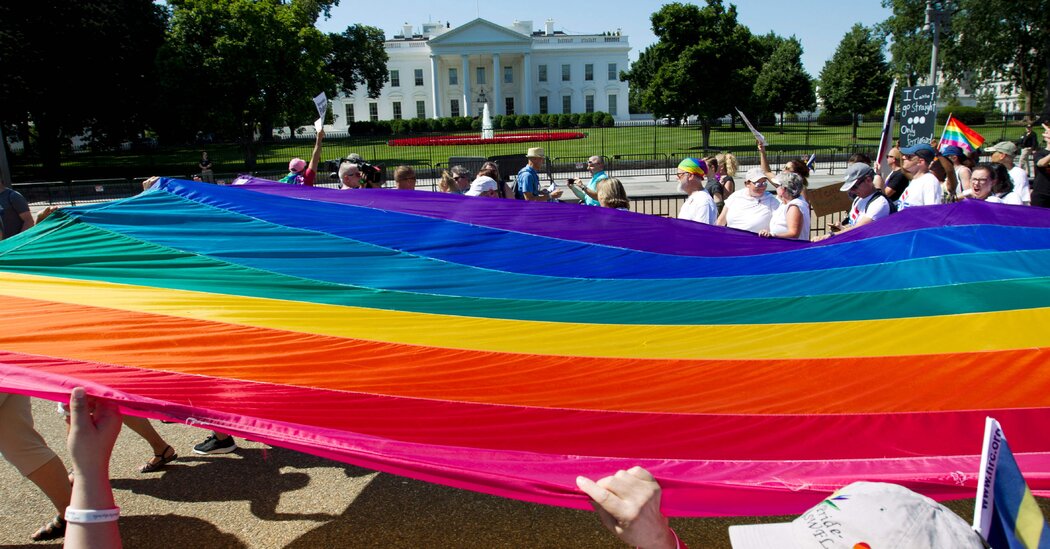 A federal judge on Friday temporarily blocked the Biden administration from enforcing directives that extended civil rights protections to L.G.B.T.Q. students and workers.

The ruling comes roughly one year after a group of 20 conservative state attorneys general filed a lawsuit against two federal agencies for their interpretation of the 1972 landmark civil rights statute known as Title IX, which prohibited sex-based discrimination in educational programs and activities that receive federal funding, and Title VII of the Civil Rights Act of 1964, which prohibited employers from discriminating against workers based on race, religion or sex.

Last year, those agencies, the Department of Education and the Equal Employment Opportunity Commission, following guidance from President Biden, said the protections afforded under Title IX and Title VII extended to gay and transgender individuals and would be enforced in workplaces and in schools.

In those directives, the agencies said that companies and schools could not deny a transgender person access to a bathroom that corresponded to that individual’s gender identity. They also said that students should be allowed to participate on a sports team consistent with their gender identity, and that federally funded schools have a responsibility to investigate sex discrimination, including sexual harassment, against students because of their sexual orientation or gender identity.

The lawsuit filed by Herbert H. Slatery III, the attorney general of Tennessee, and joined by 19 other states contended that the government infringed on states’ powers to regulate their public workplaces and schools. The attorneys general also said the administration violated federal law because it did not follow proper processes in implementing those mandates.

The landmark gender equality legislation, which was signed into law in 1972, transformed women’s access to education, sports and much more.

The Biden administration argued that the regulations were consistent with a 2020 Supreme Court ruling that said Title VII prevented employers from firing someone for being gay or transgender. The administration also requested that the lawsuit be dismissed in part because it had not begun enforcing the guidelines.

The judge, Charles E. Atchley Jr. of Federal District Court for the Eastern District of Tennessee, an appointee of former President Donald J. Trump, sided with the plaintiffs and denied the request to dismiss the suit, issuing a preliminary injunction against the enforcement of the directives until courts could decide the matter.

It was unclear what the next step would be. Judge Atchley said in his ruling that further decisions could be made by his court, the U.S. Court of Appeals for the Sixth Circuit or the U.S. Supreme Court.

The White House did not respond to requests for comment.

The judge’s ruling comes as many states are debating and passing laws barring transgender girls from competing in girls’ sports. Eighteen states bar transgender youth from participating in school sports consistent with their gender identity, according to the Movement Advancement Project, a research group that analyzes local and state L.G.B.T.Q. laws.

The Biden administration’s directives were part of a widespread effort by the White House to rescind or revise many polices of the Trump administration that restricted transgender rights.

In the 2020 Supreme Court ruling, Justice Neil M. Gorsuch, writing for the majority, said that “it is impossible to discriminate against a person for being homosexual or transgender without discriminating against that individual based on sex.”

Before that decision, it was legal in more than half of the states to fire workers for being gay, bisexual or transgender.

The state attorneys general had argued in their case that the authority on these issues “properly belongs to Congress, the States, and the people.” In siding with the states, Judge Atchley wrote that their “sovereign power to enforce their own legal code is hampered” by the government’s guidance on civil rights law and that the states faced “substantial pressure to change their state laws as a result.”

The judge also wrote that the Biden administration’s directives went beyond what the Supreme Court ruling mandated.

Jennifer C. Pizer, the acting chief legal officer of Lambda Legal, a national civil rights organization, said in a statement that the decision showed “a disturbingly blinkered view of this area of law,” adding that many federal court decisions established that federal sex discrimination standards applied in this case and that the judge overlooked the Constitution’s supremacy clause, which makes federal law “supreme” over contrary state laws.

She also said that “for these many states to argue so aggressively that they must be free to discriminate against their own residents is alarming and appalling.”