Exclusive! I haven’t locked the doors for love in my life but they are not wide open too, says Suchitra Krishnamoorthi

Kabhi Haan Kabhi Naa fame Suchitra Krishnamoorthi was recently in Lucknow to stage her play Drama Queen. The actress, who got divorced from filmmaker Shekhar Kapur in 2007, has been a single mom. But now with her daughter shifting to college, Suchitra says her life has taken a complete turn. In a chat with us Suchitra talked about her Lucknow visit, theatre, being a single parent and finding love again….

So how was your visit to Lucknow?
The funny part about the visit was that I wasn’t aware of chikankari work, so people kept telling me to try chikankari work and I was like but I am a vegetarian and why are people offering me chikan curry? But when I finally realized what chikankari was, I went to Janpath and picked up a lot of stuff. I liked it so much that later on, I picked up more stuff at the airport. I have picked up so many clothes that for the next few months, I am only going to be seen in chikankari work.

I have been here before but very briefly. This time, I managed to go out and shop. But yes, since I love history and architecture, I would love to come here for a few more days and see all that since Lucknow is the hotbed of all that. 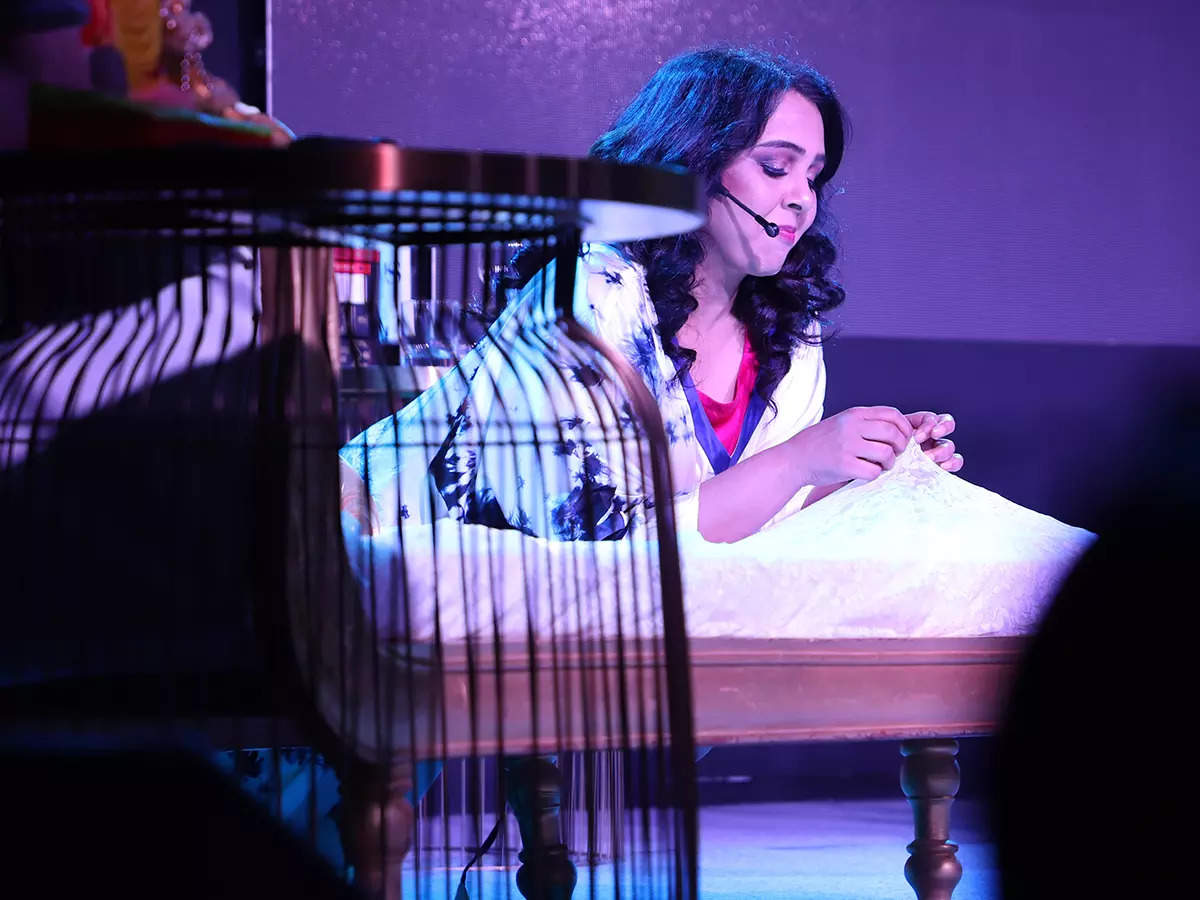 You had staged your play Drama Queen here for the first time. How did you find the audience here?
The audience here was very responsive. They were laughing and enjoying it so much. A lot of women in fact came to me later telling me that they enjoyed the show and it managed to touch a chord with them too. At the end of the day, all our (women) stories are just the same. I am happy that people got the humour in my play.

I have done loads of theatre in school and college. In fact, I got picked up for the TV series Chunauti because I was so active in theatre. I have done over 100 shows of other musical play too in the past. I did it before marriage. I stopped acting and doing theatre after marriage.

Why did you choose Drama Queen, a play as your comeback?
It is because I wanted to do something on my own. The play is written by me, the music is given by me, and it is based on the book written by me by the same name. I wished to get the discipline of theatre back with my play. By discipline I mean, doing everything on my own and performing in front of a live audience, which is not the case when we are acting in films or web shows. The budgets in theatre are very limited, I need to focus, and rehearse before performing, so all this is the discipline for me.

How do you find the theatre scene today in our country?
I watch a lot of theatre. Even when my friends are performing and they have shows, I buy my own tickets, sit quietly and watch. I love theatre more because the budgets are not so extravagant, it gives you a different insight into different stories, and it kind of expands your mind when you watch a play. As far as earning your bread and butter out of theatre is concerned, well, it depends on how lavishly you want to earn. But yes, for an actor, film, and television is more rewarding than theatre.

So what else is happening on the career front apart from the play?
I have done two web series. I decided to get back to acting after my daughter went to college. Fortunately, I am getting good offers too for acting rather than the run-of-the-mill like ‘Beta tumne khana khaya’ type roles. I started with theatre and then did TV and then films. So for me, the medium doesn’t matter at all. Talks are on for films and TV shows too but it is too early to say anything. I want to get fully active again in acting – that’s the plan!

Why did you decide to make a comeback now?
My daughter has gone to college, what else have I to do now? These are the only things I can do. I was a pretty hands-on mother. I did write a few books and also opened a candle company which I have shut now. I have always been active. I now want to move out of the house, meet new people, exchange ideas and all. Bahot ghar par baith liya.

You have been a single mom. Was it a difficult job?
Well, being a single mother was really challenging as the role is very demanding. I had been offered a lot of projects which had outdoor schedules, but I was not comfortable leaving my child back at home for work. I was very particular about being there for my daughter’s meetings in school and annual days. I always felt that I want to prioritize my child at that stage. And when my daughter left for college, I went into severe depression. I had this empty nest syndrome. I used to earlier laugh at people who used to talk about this empty nest syndrome. But It was really bad for me. It was then that I decided to get my life back on track by doing things for myself. I started putting myself first. I called up a lot of my friends and told them I want to get back to work.

Now that you have put yourself first, are you open to love or marriage?
I am very happy being single but if I have to find love, it will be on my own terms now. Mujhe ab jhik-jhik, bak-bak nahi chahiye. I haven’t locked the doors for love in my life but they are not wide open too. Over the years, I have become emotionally very self-reliant and don’t feel the need to lean on anybody. To make myself vulnerable again, would take me a while.