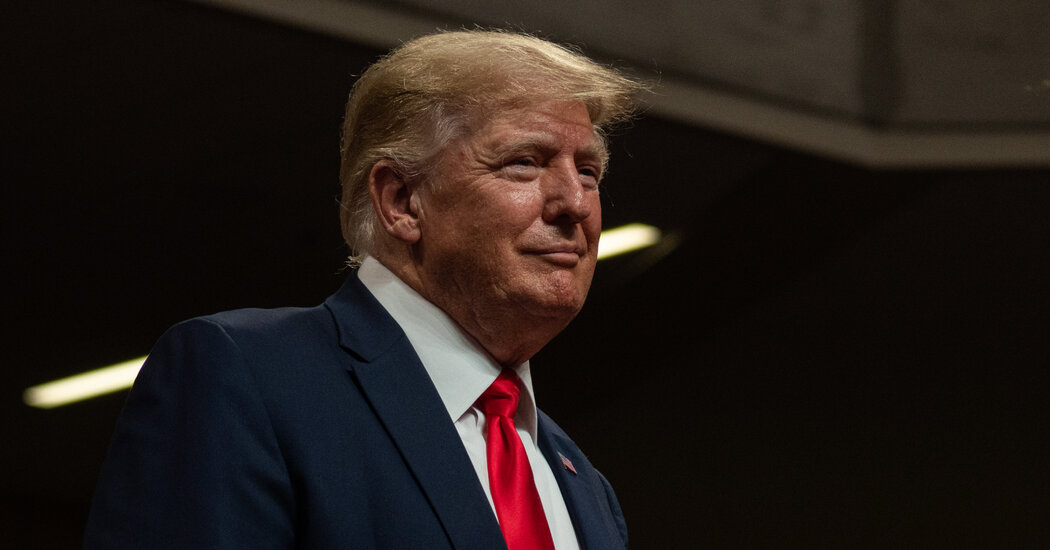 The New York State attorney general, Letitia James, sat across from Donald J. Trump as he repeatedly declined to answer questions, invoking his right against self-incrimination during a deposition on Wednesday, according to one of Mr. Trump’s lawyers.

The lawyer, Ronald P. Fischetti, said that over the course of about four hours, with several breaks, Mr. Trump answered only one question, about his name, toward the beginning of the interview.

Then he read a statement into the record in which he called the inquiry a continuation of “the greatest witch hunt in the history of our country” and accused Ms. James of having “openly campaigned on a policy of destroying me.”

Ms. James did not visibly react, Mr. Fischetti said in an interview.

After that, Mr. Trump repeated the words “same answer” from about 9:30 a.m. to around 3 p.m., with a long break for lunch and several shorter breaks.

“They asked a lot of questions about valuations and golf clubs and all that stuff,” Mr. Fischetti said. He said that Mr. Trump did not diverge from that answer, offering the same response until the interview was over.

Ms. James read an introduction at the opening of the interview but left the questioning to one of her office’s lawyers, Kevin Wallace. A number of other lawyers from her office were present, and Mr. Fischetti said he was joined by another of Mr. Trump’s attorneys, Alina Habba.

The attorney general’s office had not been alerted in advance that Mr. Trump was going to take the fifth, Mr. Fischetti said, in part because the decision was made only shortly before the interview and Mr. Trump had to be persuaded not to answer the questions substantively.

“He absolutely wanted to testify, and it took some very strong persuasion by me and some others to convince him,” Mr. Fischetti said.

The statement that Mr. Trump read overlapped significantly with one that he released publicly earlier in the day, in which he linked his refusal to answer questions to the F.B.I.’s search of his home on Monday, casting the actions as part of a larger effort by his political opponents to discredit him. (The two investigations are not linked.)

“I once asked, ‘If you’re innocent, why are you taking the Fifth Amendment?’” he said in both statements. “Now I know the answer to that question.” He said that he was being targeted by lawyers, prosecutors and the news media, and that left him with “no choice.”