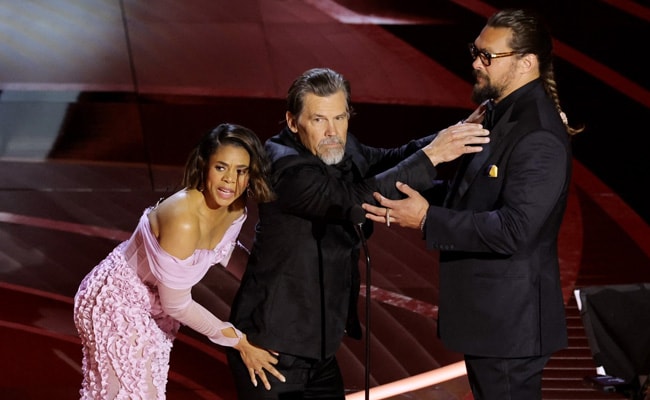 Like every year, this edition of the Oscars too managed to offend quite a few people for different reasons. While, Chris Rock’s distasteful humour about Jada Pinkett Smith and Will Smith responding with a slap have been singled out as the most problematic moment of the 94th Academy Awards, the ceremony also received flak for the inappropriate jokes made on the pandemic, host Regina Hall’s cringe moments with male actors on stage and the snub of a few actors, especially Timothee Chalamet, who was one of the attendees at the show but was not nominated in the Best Actor category. Here’s what offended Twitter this year:

The Oscars returned with a host (3 in today’s case) after a gap of three years and Regina Hall’s gig, in particular, received major flak online. To begin with, it involved a couple of jokes about COVID-19. As a part of her gig, Regina Hall joked that some of the COVID test results of attendees had been lost and that she would need some guests to do some emergency testing backstage. She called “totally random” stars including Bradley Cooper, Timothee Chalamet, Tyler Perry and Simu Liu on stage and said that they needed a “deep PCR” test. “It’s simple. I’m going to swab the back of your mouth with my tongue,” she said. Twitter flagged it as “inappropriate” and this is what some of them tweeted.

Me whenever there’s a COVID joke #Oscarspic.twitter.com/WuSuU9Qyfe

Can we not do COVID jokes? How cringey is it to make entire joke about something that has killed millions and millions of people? #Oscars

Regina Hall touching Josh Brolin and Jason Momoa on stage and and labelling it as per the Academy’s “protocol” did not go well with Twitter users. Here’s how people reacted to it.

Who wrote this awkward bit for #reginahall#Oscarspic.twitter.com/Rt4m5vWUKO

i’m sorry but regina hall doing that bit was disgusting. how was that approved?? you could tell everybody was so uncomfortable!! #oscars#reginahall

Is it even the Oscars without people complaining about snubs of their favourite artists every year? A fan of Timothee Chalamet was upset about the actor not receiving a single nomination despite featuring in two films – Dune (which won all the major technical awards) and The French Dispatch. The actor also had a brief role in the Best Picture nominee Don’t Look Up ( which failed to win any award). “Two of Timothee Chalamet’s best performances, and both were snubbed by the Oscars. Time to cry,” wrote a fan.

two of timothée chalamet’s best perfomances, and both were snubbed by the #Oscars. time to cry pic.twitter.com/vJmInKGStY

Even before the ceremony took place, the Oscars were criticised big time due to the controversial decision to pre-tape awards in eight categories. The Best Sound, Best Score and other technical categories had their speeches edited into the broadcast. Speaking of the decision, Dune director Denis Villeneuv told news agency AFP, “I understand that the Academy are working under tremendous pressure, but I think that they made a mistake.”

(With inputs from AFP)