BISHOPENTERTAINMENT
HomeENTERTAINMENTCelebrities who broke all the wedding stereotypes and set new goals for... 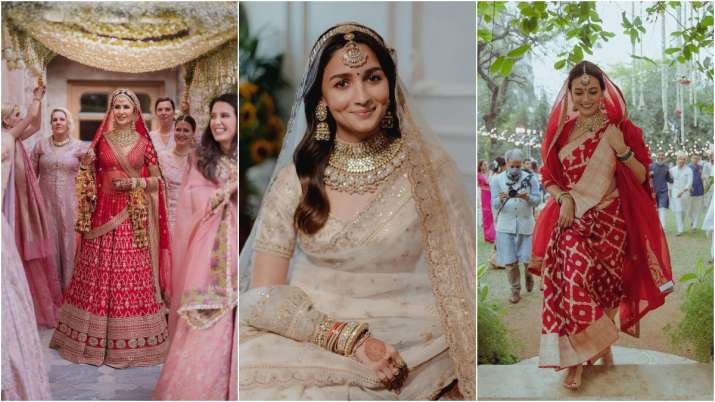 
At any Indian wedding ceremony, there are a number of traditional rituals followed by families on the groom’s and bride’s sides. This is a sign of cultural rootedness. Many customs and special rituals are followed by Indians during a typical two-three day wedding ceremony. It is believed that certain rituals and traditions are important to be followed to lead a successful married life. However, some celebrity brides in recent times have done away with wedding rituals that are considered stereotypical. This not only challenges the dogmatic Indian society and its belief system but also sets a good precedence for future generations.

The Rehna Hai Terre Dil Mein actress got married to her beau Vaibhav Rekhi in a private ceremony. The ever so gorgeous actress chose to wear a red saree for her big day. The special attention that we caught from her wedding was the role of a priest. The couple chose to take their wedding vows in presence of a female priestess by breaking the old belief of having a male priest.

In our Indian society, there is a wedding ritual of putting sindoor also known as vermilion on the bride’s forehead by the groom. Recently, Rajkummar Rao, who married his long-time partner Patralekhaa, together broke the stereotype of putting vermilion. We saw them in a happy mood as they posted their wedding video and pictures, in one of them the bride is putting vermilion on the groom’s head and they are seen in a happy mood.

At her December 2021 wedding with Vicky Kaushal, Katrina Kaif proved she walks the talk. The actress on her big day walked the aisle with her sisters holding ‘phoolon ki chaadar’ for her (flower’s net over her head). Mostly, this ritual is carried by the bride’s brothers or her male cousins. But, for the Phantom actress, her sisters held the phoolon ki chaadar as they were always by her side throughout her life as a pillar.

Badhaai Ho actress Neena Gupta is an inspiration to many. The actress not only plays inspiring roles in the films but her personal life is also inspiring. From raising her daughter Masaba Gupta all alone to getting settled at the age of 50 years with charted accountant Vivek Mehra, she has set some serious life goals.

Actress Suhasini Mulay, who has worked in some remarkable films like Jodha Akbar, Lagaan, etc also broke the societal norm. The actress got married at the age of 60 to physicist Atul Gurtu.

Alia Bhatt chose to go for a no-makeup look on her wedding day, embracing her skin as it is. She stunned in a Sabyasachi bridal saree but kept her makeup to a bare minimum.

- Advertisement -
Facebook
Twitter
Pinterest
WhatsApp
Previous articleExclusive! Avneet Kaur and Raghav Sharma are in love
Next articleZayed Khan shares new pictures of his ‘transformed’ look as he thanks Sussanne Khan, Hrithik Roshan: ‘I am finally taking my journey as an actor’ | Hindi Movie News