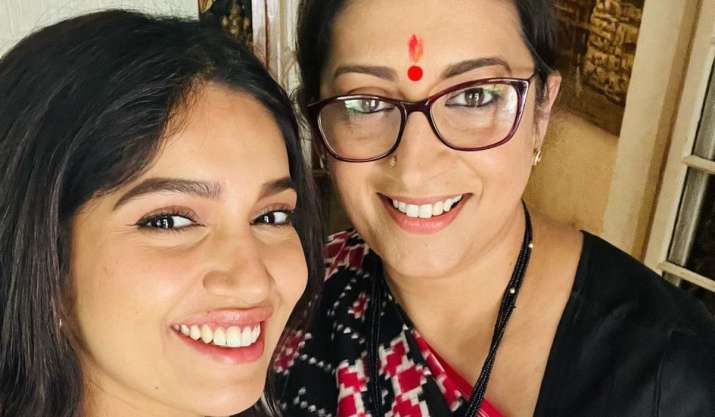 
Bollywood actress Bhumi Pednekar met Union Minister for Women and Child Development and former actress Smriti Irani on Tuesday (March 29). The duo shared smiles for a selfie together, posted by Bhumi on her Instagram handle. In the picture, the Badhaai Do actress can be seen wearing a white top while Irani looks beautiful in a saree. Bhumi penned an appreciation note for former actress and thanked her for her amazing work towards children and women.

In the caption, Bhumi wrote, “@smritiiraniofficial loved meeting you today. More power to you ma’am for all the amazing work you’re doing towards uplifting our gender, the children of our country and all compromised communities.”

On the professional front, Bhumi was last seen in the critically acclaimed film, ‘Badhaai Do’, which also starred Rajkummar Rao. The film highlighted the concept of lavender marriage (a marriage between a man and a woman for the purpose of hiding homosexuality). Bhumi essayed the role of Suman Singh, a 31-year-old physical education teacher, who is interested in women. She marries a cop named Shardul Thakur (Rajkummar) to escape the pressure of their families. The real twist in the story comes when Rajkummar’s character hints that he is also a homosexual. On Smriti Irani’s birthday, her old videos as Kyunki Saas Bhi Kabhi Bahu Thi’s Tulsi Virani go viral

The actress recently wrapped up ‘Bhakshak’. In the film, Bhumi will be seen essaying the role of a feisty journalist. Set in the rustic world of Bihar, the film will showcase the journey of an unwavering woman’s quest to seek justice and her perseverance in getting a heinous crime to light. Apart from ‘Bhakshak’, Bhumi has multiple other projects in the pipeline including ‘Raksha Bandhan’, ‘Afwaah’, ‘The Lady Killer’, ‘Bheed’ and ‘Govinda Naam Mera’.