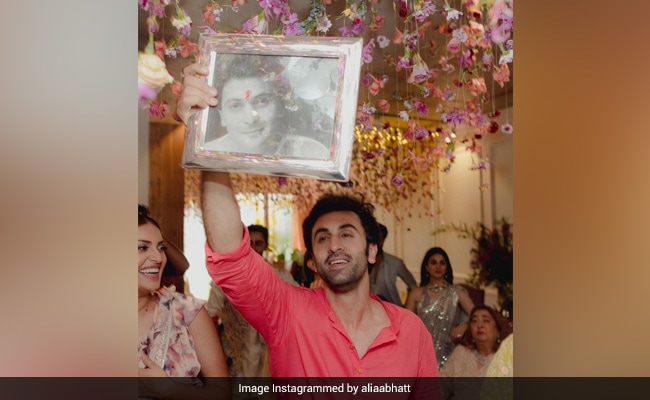 Bollywood fans have been glued to social media for a few days now, all thanks to Alia Bhatt and Ranbir Kapoor’s dreamy wedding. Now, Alia has begun the weekend on a love-filled note by treating us all to special images from the couple’s mehendi ceremony. While the pictures feature Alia, Ranbir and their loved ones in the best of spirits, the actress’s caption revealed that there was indeed a whole lot of laughter, dancing and food to mark the special occasion. Among the several lovely pictures of the celebration is a moving one, in which Ranbir Kapoor is grooving with a framed photo of his late father, Rishi Kapoor in his hand.

That the veteran actor was sorely missed at the event is evident from the posts shared by Rishi Kapoor’s wife Neetu Kapoor and daughter Riddhima Kapoor Sahni. Now, the image of Ranbir Kapoor celebrating with his late father’s photo in hand has won hearts on social media. Following a prolonged battle with cancer, Rishi Kapoor died in 2020.

The other pics shared by Alia Bhatt feature the Kapoor clan including Ranbir, Neetu Kapoor, Kareena Kapoor, Riddhima Kapoor and Karisma Kapoor putting up a spirited dance performance. The images also feature Alia Bhatt with sister Shaheen Bhatt, friend Ayan Mukerji and Team bride. That’s not all, in addition to Ranbir Kapoor getting Alia Bhatt’s name etched in mehendi on his hand, the couple were also captured sharing some tender moments.

Sharing the post, Alia Bhatt said, “The Mehendi was like something out of a dream. It was a day full of love, family, our beautiful best friends, a lot of French fries, a surprise performance by the ladkewalas, Ayan playing DJ, a BIG surprise organised by Mr Kapoor (my favourite artist performed my favourite songs), all followed by some happy tears and quiet, blissful moments with the love of my life.”

Hours after their wedding on April 14, Alia Bhatt shared images from the ceremony on social media. On behalf of Ranbir Kapoor, who is not on social media, and herself, Alia penned a note sharing the happy news with fans. “With so much already behind us, we can’t wait to build more memories together…Memories that are full of love, laughter, comfortable silences, movie nights, silly fights, wine delights and Chinese bites,” an excerpt from her post reads.

With each photo of the wedding prettier than the other, it’s all eyes on Alia Bhatt’s social media handles for more glimpses of the happy occasion.