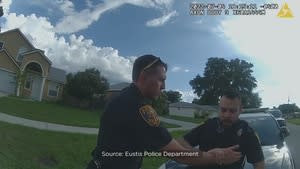 An Apopka police officer is on leave after investigators said he drove drunk in his patrol car.

A video that another driver took showed the officer driving erratically.

Officer Oscar Mayorga was on his way to work when investigators said they found alcohol in his patrol car.

Officers said Mayorga had a hard time standing up to the point that they had to put him on a stretcher.

The officer’s arrest was captured on body camera video.

Eustis police pulled Mayorga over in his squad car on Monday.

Mayorga is a five-year veteran of the Apopka Police Department.

Mayorga was on his way to work when an alert citizen snapped a cellphone video.

“There’s definitely something wrong with this guy,” a person in the video said.

The driver reported that the officer was driving the patrol car recklessly, even running stop signs.

“He appears to be highly intoxicated,” the person said.

At first, Mayorga denied that he had anything to drink.

He later agreed to give two breath samples.

He was arrested after blowing a 3.91 and 3.85 — nearly five times the legal limit to drive.

Mayorga is on paid leave, pending the outcome of an internal investigation.