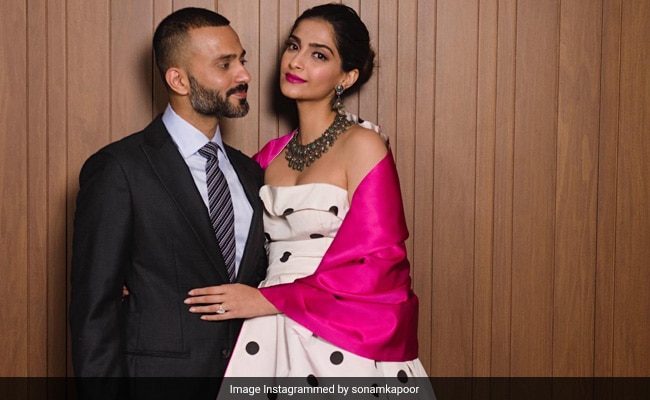 Sonam Kapoor and Anand Ahuja are perhaps the happiest people today. Why? The power couple has announced that they are soon going to be parents. Of course, their family, friends and fans can’t keep quiet. The parents-to-be are receiving loads of wishes from all fronts. Among the well-wishers is Anushka Sharma. She has reposted the announcement on Instagram Stories. Not just that. Anushka also wrote, “Congratulations Sonam Kapoor and Anand Ahuja. The experience is unparalleled and special. Wishing you love and happiness in abundance.” A heart emoji completed the note. Of course, the internet is gushing over this gesture from Anushka. Take a look:

Sonam Kapoor’s pregnancy announcement post is all things adorable. The photos show Sonam lying on the lap of her husband Anand Ahuja. The two share some candid shots. For the caption, Sonam wrote, “Four hands. To raise you the very best we can. Two hearts. That will beat in unison with yours, every step of the way. One family. Who will shower you with love and support. We can’t wait to welcome you.” Of course, the comments section got flooded with good wishes. Sonam Kapoor’s mother Sunita Kapoor reacted to the post with heart-eyed emojis. Sonam’s cousin Anshula Kapoor also dropped heart emojis in the comments. Shanaya Kapoor wrote, “I love you guys.” Janhvi Kapoor wrote, “Oh my god what.”

Regarding Anushka Sharma’s shoutout to Sonam Kapoor, this isn’t the first time that we are seeing such an exchange between the two actresses. In 2018, on Sonam Kapoor’s wedding day, Anushka congratulated the newlyweds with a heartwarming note. Anushka, who had married cricketer Virat Kohli the previous year, wrote, “Happiness, love and a lifetime of joy to you both Sonam Kapoor and Anand Ahuja. Welcome to the club. It’s such a beautiful journey of life, love and growth.”

Sonam Kapoor and Anand Ahuja got married in May 2018. The couple is currently living in London.