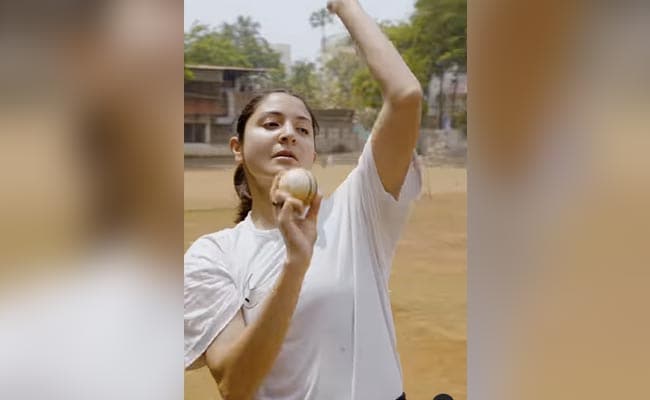 Anushka Sharma’s Cricket Prep Gets This Reaction From Jhulan Goswami

Anushka Sharma is leaving no stone unturned in her preparation for the upcoming project Chakda Xpress. The actress, on Monday, shared a video from her prep session and it is all kinds of amazing. The carefully edited video features Anushka Sharma practising her bowling in the sweltering summer, stopping only to drink a sip or two of water and wiping down her sweat. Sharing the video, Anushka Sharma wrote, “That’s how the last few days have been!” adding emoticons depicting the sun, heat and a cricket bat and ball. She also added the hashtags “prep”, “Chakda Xpress” and “Get Sweat Go”.

And, it looks like all the hard work is paying off as the actress got a thumbs up from Jhulan Goswami, whose life the film is based on. Replying to the post, Jhulan Goswami dropped hearts, claps and happy emojis.  Jhulan Goswami is a former captain of the India national women’s cricket team.

Dhanashree Verma, who is married to cricketer Yuzvendra Chahal replied to Anushka Sharma’s post with fire emoticons. For the unversed, Anushka’s husband, cricket icon Virat Kohli and Yuzvendra Chahal have played together for the Indian national men’s cricket team.

Earlier this month, amid rising temperatures, Anushka Sharma had shared a photo post her practice session. Sharing the selfie, Anushka wrote, “Post practice in this heatwave”. In the image, she is seen in a simple black t-shirt and sunglasses, with her face covered in sweat.  Read about it here.

Before that, Anushka Sharma had shared another video in which she is seen preparing for the role by indulging in a complex workout session. Sharing the video, she said, “Get-Sweat-Go! Chakda Xpress prep getting hard and intense as we are counting days.”

Earlier too, Anushka Shara teased fans with pictures of her perfecting the craft of bowling – an uphill task, undoubtedly. The first of the two images is a closeup of the actress’ hand as she learns to grip the cricket ball. In the second image, she is seen practising her bowling technique, with her face exuding concentration. In her caption, the star said, “Grip by grip”. Anushka’s efforts caught the attention of Jhulan Goswami herself, who wrote, “Very nice,” along with thumbs up, claps and raised hands emojis.

Anushka Sharma was last seen in the 2018 film Zero. The Jhulan Goswami biopic is her first film since the birth of her daughter Vamika, who she and  husband Virat Kohli welcomed in 2021.