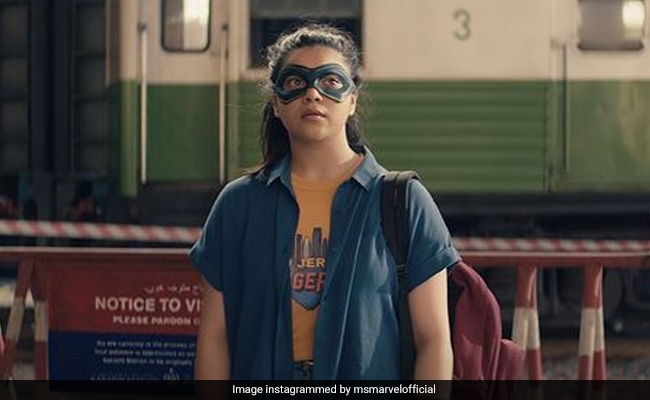 Nothing could be more at variance with the fantastical ways of the Marvel Cinematic Universe than a pair of doting South Asian-origin parents in the US of A doing all they can to “protect” their teenage daughter “from herself”. The duo is perforce an integral part of a world far removed from theirs in the Disney+ miniseries Ms. Marvel, the sixth and final episode of which landed on the streaming platform on July 13.

The show is as much about ordinary people learning to come to terms with the extraordinary quirks of fate as it is about interdimensional travel and superhero deeds that change the dynamics within a Pakistani-American family with a legacy that places its youngest member at odds with forces from another sphere as well as agents of the Department of Damage Control.

Ms. Marvel delivers superhero who is new in many respects, not the least of which is that she is a Brown girl from Jersey City endowed with powers to save the world. Kamala Khan (Iman Vellani) is an Avengers fan whose imagination never ceases to be in overdrive.

Her fertile mind and a seemingly innocuous bangle that her grandmother in Karachi couriers to her mother unlock her superhuman side. Mom Muneeba (Zenobia Shroff) dismisses the heirloom as junk. Kamala thinks otherwise. It binds four generations of women of a family displaced by the violence that rocked the Indian subcontinent during the Partition.

Ms. Marvel is more than just a superhero saga that is meant to set the stage for the entry of Kamala Khan and her family into the upcoming big screen movie The Marvels. Much of the tale centres on the heroine’s moves to reconcile the ordinariness of her upbringing and milieu with the singular future that destiny has in store for her.

The series goes beyond the parameters of a coming-of-age drama to focus on an intense tussle for identity assertion and acceptance. But It isn’t mere brownie points that the series scores on behalf of multiculturism. It has the feel of a full-fledged revolution. Quite apart from the fact that Pakistani-Canadian Iman Vellani is an absolute treat to watch as she brings a combination of a 16-year-old’s cheerful abandon and a chosen one’s challenges upon the role, Ms. Marvel guides the audience into a tangled history that was hitherto well beyond the veil of the MCU – the history of the Partition of the Indian subcontinent that left a trail of broken lives in its wake.

Ms. Marvel is a series of six episodes but, when watched at one go, it could be treated as a self-contained five-hour film because what producer Kevin Feige and Marvel Studios have created is one run-one story that, unlike most other web shows, does not hinge on humdinger episodic endings to sustain excitement and ensure that the viewer keeps coming back for more.

The show peaks, pauses, wavers and rises again, riding on a sustained yet supple narrative rhythm and moving from Kamala Khan’s inner world to the universe beyond her immediate environs – the subcontinent in the 1940s.

Kamala, who believes that “there is no such thing as a bad Sharukh Khan movie”, lives with her father Yusuf (Mohan Kapur), hawk-eyed mother Muneeba and an older brother, Aamir (Saagar Shaikh) whose wedding is nigh. The Khans have picked up the pieces and moved on, building a life in New Jersey, where the children are free to be who they want to be. Well, “almost”, as Muneeba asserts. Who she wants to be is at the centre of the story of Kamala Khan/Ms. Marvel. The transition isn’t easy. Kamala’s friend and activist Nakia (Yasmeen Fletcher), who throws her hat into the ring for the mosque board election, puts the struggle in perspective when she explains why she sports a traditional headscarf.

“My whole life I’ve either been too White for some people or too ethnic for others… And it’s been this very uncomfortable, sucky in-between,” Nakia says, reflecting exactly what Kamala is up against not only on the identity front but also with regard to the pressing need to channel the power that her great-grandmother’s bangle bestows upon her.

Amid the Bollywood numbers that pop up at regular intervals – from Bhangra pop to wedding songs – there is a foot-tapping number from a 1966 Pakistani film (Ko ko korina, composed by Sohail Rana and sung by Ahmed Rushdi for Armaan) that deserves special mention. The film was remade about a decade back and a remixed version of the number picturized on Fawad Khan, who, incidentally, plays a cameo in Ms. Marvel as a 1940s rose farmer lost in the mist of time.

Ms. Marvel makes generous use of animated passages that in a way serve the purpose that thought bubbles do in comic books – provide a peep into the mind of the principal character. They also bring alive in vivid colours the plans that Kamala hatches with her best pal, schoolmate and tech adviser Bruno Carrelli (Matt Lintz). A suggestion of a love triangle involving Kamala, Bruno and Kamran (Rish Shah), a new senior at high school for whom the protagonist develops a crush, remains just that – a suggestion. It flows like an undercurrent but does not take the focus away from Kamala’s process of figuring out the rapid changes sweeping over her life.

Referring to the energy that pulses through her, Bruno asks her: How does it feel? “Like an idea come to life,” she replies. There we are – Ms. Marvel, carrying on a with process that began with Black Panther and led to Shang-chi and the Legend of the Ten Rings, is indeed an idea come to life in a whippy, witty, entertaining way. A mid-credits scene at the end of the sixth episode – not all that much of a surprise since we know what is on the way – whets our appetite as fans gear up for a Marvel movie with an all-female team of superheroes.

Iman Vellani is the one who shines the brightest – Ms. Marvel wouldn’t be half the wonder that it is without her winsome presence. All other cast members, notably Zenobia Shroff, Mohan Kapur, Yasmeen Fletcher and Matt Lintz, are at their very best in an MCU entry that will always be regarded as a watershed.