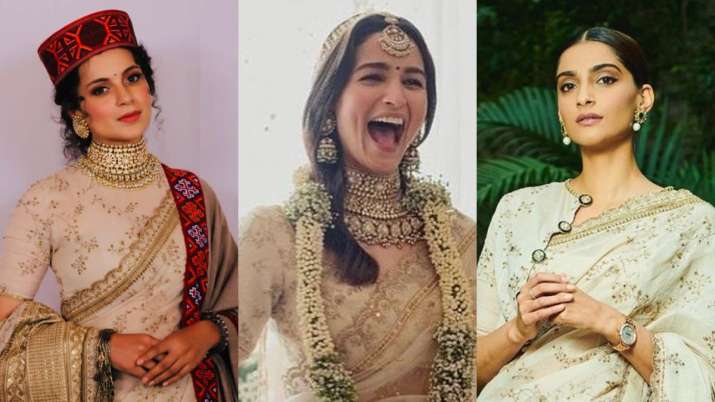 
As the excitement over Ranbir Kapoor and Alia Bhatt‘s wedding continues fans are busy decoding bride Alia’s wedding look. Her customised kaleera’s, magalsutra impressed a lot of fans and they couldn’t stop themselves from gushing over her royal wedding look. But recently some of the fans were left disappointed as they noticed that Alia’s Sabyasachi saree is not exclusive and it was previously worn by Bollywood actresses Sonam Kapoor and Kangana Ranaut. Several pictures of both the actresses donning the same ivory organza saree as that of Alia are doing rounds on the internet.

Kangana Ranaut wore the saree in silk fabric with beige and golden embroidery and styled it with a matching blouse during her brother’s reception.

Reacting to Kangana’s 2020 post, one user wrote, said, “@aliaabhatt s wedding dress has been worn by @kanganaranaut ages back!!” Another one commented, “So Alia’s wedding saree is inspired by this?” Another said, “Nah, their outfits are not the same, but eerily similar! Kangus is floral, @aliaabhatt has butterflies and what not! But @sabyasachiofficial is lazy AF! Can’t believe they didn’t run this by @aliaabhatt because no way would she choose something for her big day that would give more ammo to Kangana to use against her.”

On the other hand, Neerja actress Sonam Kapoor also wore a similar-looking saree in the past but again in a different fabric. She completed her look with a cropped jacket of the same fabric.

Meanwhile, Alia Bhatt wore a hand-dyed ivory organza sari embroidered with fine tilla work and an embroidered handwoven tissue veil with a customised butterfly blouse. She completed the look with Sabyasachi Heritage Jewellery featuring uncut diamonds and hand-strung pearls. The actress wore a unique set of gold kaleera’s as well which had clouds, flying birds, stars, and a symbol of infinity or eight on them. As we all know, 8 is Ranbir’s lucky number. Her gold chain mangalsutra consisted of a teardrop diamond and a symbol of infinity on it with a black beads chain.

Ranbir and Alia tied the knot at the former’s Bandra residence Vastu on Thursday. The duo took pheras in the presence of their close friends and family members.