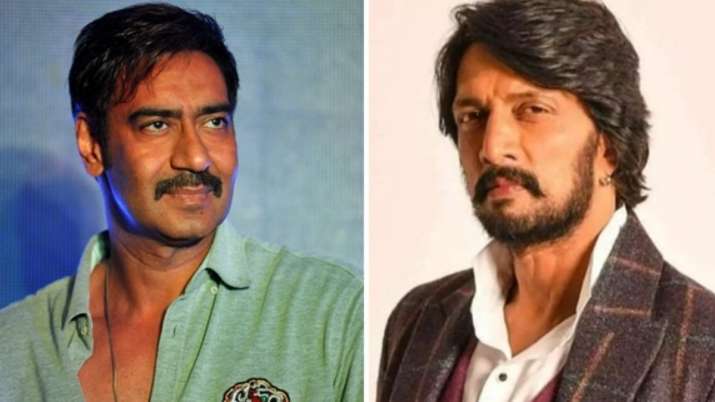 Ajay Devgn slammed Kiccha Sudeepa’s recent remark about Hindi not being India’s national language. The Kannada actor was speaking about the pan-Indian films at an event, where he said that “Hindi is no more a national language.” Reacting to the comment, the Runway 34 actor-director Ajay Devgn asked, if Hindi is not the national language, why does Sudeepa release his films dubbed in Hindi. Also, he emphasized that Hindi always has been and will continue to be our national language.

In a series of tweets, the Kannada actor responded to Ajay, assuring him the statement was taken out of context and he had no intentions to hurt anyone’s sentiment. “Hello @ajaydevgn sir.. the context to why i said tat line is entirely different to the way I guess it has reached you. Probably wil emphasis on why the statement was made when I see you in person. It wasn’t to hurt,Provoke or to start any debate. Why would I sir,” he tweeted.

“I love and respect every language of our country sir. I would want this topic to rest,,, as I said the line in a totally different context. Mch luv and wshs to you always. Hoping to seeing you soon,” he added.

In another post, he tweeted, “And sir @ajaydevgn,, I did understand the txt you sent in hindi. Tats only coz we all have respected,loved and learnt hindi. No offense sir,,,but was wondering what’d the situation be if my response was typed in kannada.!! Don’t we too belong to India sir.” ALSO READ: Malayalam actor Vijay Babu booked for sexual assault; survivor alleges he raped her several time

Devgn then thanked Sudeepa for “clearing up the misunderstanding” and said he simply wanted to ensure that people respect all languages.

“Hi @KicchaSudeep, You are a friend. thanks for clearing up the misunderstanding. I’ve always thought of the film industry as one. We respect all languages and we expect everyone to respect our language as well. Perhaps, something was lost in translation” he added.

Translation and interpretations are “perspectives”, Sudeep said in his response to Devgn. “That’s the reason not reacting without knowing the complete matter, matters. I don’t blame you @ajaydevgn sir. Perhaps it would have been a happy moment if I had received a tweet from you for a creative reason. Love and regards.” Sudeep concluded.

Meanwhile, Kiccha Sudeepa was speaking at the event when he said “You said that a pan India film was made in Kannada. I’d like to make a small correction. Hindi is no more a national language. They (Bollywood) are doing pan-India films today. They are struggling (to find success) by dubbing in Telugu and Tamil, but it’s not happening. Today we are making films that are going everywhere.”