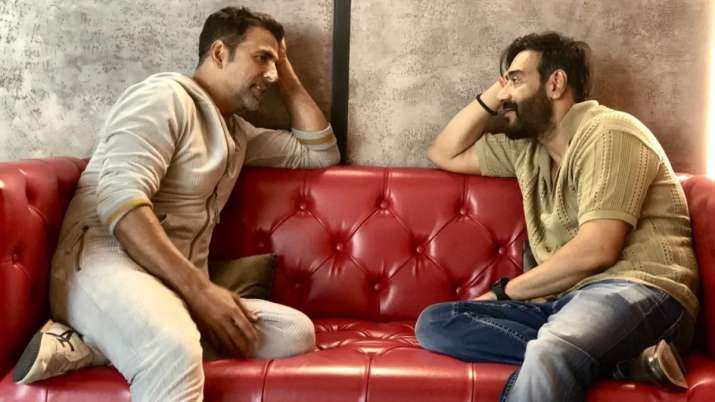 Ajay Devgn posts for Akshay Kumar as the ‘Khiladi of Bollywood’ completed 30 years in the industry. The actor shared a photo of them sitting together on a couch and wished him all the success in the world. The photo has been winning the hearts of their fans. Their admirers are loving how they have been friends for a long time and are finding their camaraderie inspiring. Commenting on the post, a user dedicated Kishore Kumar’s song ‘Tere jaisa yaar kahan’ from the film Yaarana to them. Another called them ‘best friends’, while a third one tagged the photo as ‘friendship goals’. The photo also drew reactions from Bollywood celebs including Ranveer Singh, who dropped a heart emoji in the comment section.

“Congratulations Akki. 30 years in cinema and several more decades to come. Hope you set new records. Will always be there rooting & cheering for you,” Devgn who has shared the screen with Kumar in films like ‘Khakee’, ‘Sooryavanshi’ and ‘Suhaag’ among others captioned the post. Take a look:

Meanwhile, superstar Akshay Kumar on Wednesday thanked his fans for their unconditional love over the years as he celebrated three decades in the Indian film industry. “I didn’t even realise that I had completed 30 years. Thank you Aditya Chopra for gifting me this. I still remember that I gave my first shot in Ooty, it was an action shot with Bob Christo,” Kumar, who has starred in over a 100 films, said in the video.

Kumar, whose real name is Rajiv Bhatia, made his film debut with Raj Sippy’s romantic-action “Saugandh”, which released on January 25, 1991. The actor went on to become one of the biggest action stars of the 1990s, featuring in hits like the “Khiladi” series, and switched gears to doing comedies with Priyadarshan’s “Hera Pheri” in the next decade. Kumar delivered several hits in the comedy genre, which includes films such as “Mujhse Shaadi Karogi”, “Garam Masala”, “Welcome” and “Singh is Kinng”.

He will next be seen ‘Prithviraj’ which is based on the life and valour of the fearless and mighty Samrat Prithviraj Chauhan. He is essaying the role of the legendary warrior who fought valiantly against the merciless invader Muhammad of Ghor. The film has been directed by Dr. Chandraprakash Dwivedi, who is best known for directing the television epic ‘Chanakya’ and the critically acclaimed film ‘Pinjar’. Manushi Chhillar plays the role of King Prithviraj’s beloved Sanyogita.

The film is set to release on June 3 in Hindi, Tamil and Telugu.