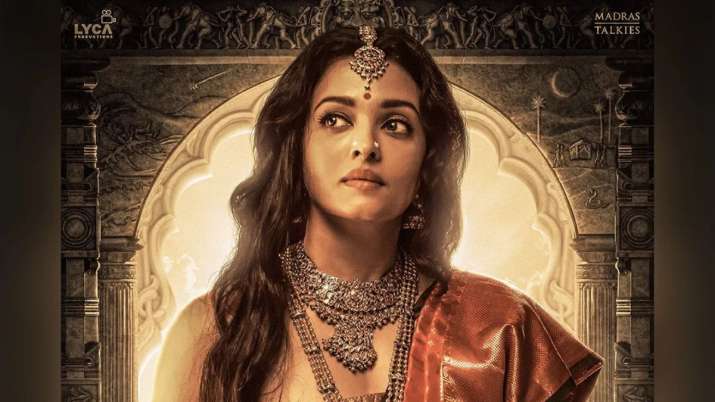 
On the heels of releasing the first looks of Vikram as Aditya Karikalan and Karthi as Vanthiyathevan from director Mani Ratnam’s magnum opus, ‘Ponniyin Selvan’, the makers of the much-awaited epic film on Wednesday released the first look of Aishwarya Rai Bachchan as Queen Nandini in the film.

Lyca Productions, which is producing the film along with Mani Ratnam’s Madras Talkies, tweeted the first look picture of Aishwaraya Rai in the film and said: “Vengeance has a beautiful face! Meet Nandini, the queen of Pazhuvoor!” The film, the first part of which will release on September 30 this year, will release in five languages — Tamil, Telugu, Malayalam, Kannada and Hindi.

The film, called by Mani Ratnam as his dream project, will be among the most expensive projects ever undertaken in the country. It is based on the 1955 novel Ponniyin Selvan, by Kalki Krishnamoorthy. Ever since the novel became a hit in Tamil Nadu, many movie makers attempted to work on it, but they could not turn their pursuit into a film.

The novel is based on the 10th-century Chola period and the fights within the ruling clan. The role played by spies of the empire, its military leaders and the politics behind it are all shown in the movie.

Legendary Tamil actor MG Ramachandran (MGR), who later went on to become the Chief Minister of Tamil Nadu, and was awarded Bharat Ratna posthumously, had tried his hand in making Ponniyin Selvan after the novel hit the stands. His attempt, too, did not lead to any results due to various reasons.

Mani Ratnam himself tried to make the film in 1999 and 2009 but in vain. He later roped in Lyka Productions for funding the movie and thus the movie shoot commenced. His own Madras Talkies and Alirajah Subaskaran also joined in the production of the movie.

The film has the best business handling for each of its departments. A. R. Rahman is scoring the music for this epic historical and cinematography is by Ravi Varman. National Award winning art director Thotta Tharani is in charge of production design while Mani Ratnam’s trusted editor Sreekar Prasad is the editor.

The movie was shot across India and a few locations in Thailand.

The shooting for the movie commenced in December 2020 and concluded in September 2021. With the Covid pandemic, the release of the movie was delayed but now the filmmaker has announced that it will have a worldwide release on September 30.

- Advertisement -
This post contains affiliate links. If you use these links to buy something we may earn a commission. Thanks.”
Facebook
Twitter
Pinterest
WhatsApp
Previous articleHacker Offers to Sell Chinese Police Database in Potential Breach
Next articleMega Millions jackpot rises to $400 million for Friday; California tickets win big