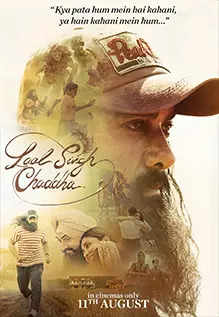 Laal Singh Chaddha Story: Slow-witted but an eternal optimist, Laal Singh Chaddha (Aamir Khan) stumbles through life, thinking to himself — should you write your own destiny or float freely like a feather going wherever life takes you? Is life a question of choices, matter of chances or the symphony of both? Directed by Advait Chandan, the film is a Hindi adaptation of Robert Zemeckis’ 1994 Oscar winning film ‘Forrest Gump’, starring Tom Hanks.

Laal Singh Chaddha Review: Laal Singh Chaddha verbalises Forrest Gump’s musings on life, love, morality and destiny. If the original conveyed things best in a soft, easy, unspoken way; this film turns up the tone and energy a bit. It opts for speech over silent tears so expect a perpetually wide-eyed Aamir Khan doing a lot of Punjabi accent with PK’s body language and enthusiasm. He sets the tempo of this film a bit higher, that of a big-ticket Hindi feature film but retains the essence of the original — a Disney like fairy-tale without the luxury of magic but an ingrained belief in miracles. Laal Singh Chaddha (LSC) localises the events but continues to stay in Forrest’s world.

Adapting a classic isn’t an easy territory to tread. Remaking Forrest Gump (FG) is even more complicated given its meandering, all-encompassing, nonlinear plot and profound yet simple approach to life and its purpose. You watch a simpleton wandering through life, not looking for answers but finding them along the way. He tells you his story as he embarks on a train journey from Pathankot to Chandigarh –his tough childhood, feisty mother (Mona Singh), childhood sweetheart Rupa (Kareena Kapoor Khan), accidental wealth, wars fought, friends made (Naga Chaitanya Akkineni as Bala and Manav Vij as Mohammed), facing death and running through the pain. We can’t say if the remake was necessary, but it was definitely a tough act to follow given how disarmingly poignant the original is and you know exactly how the events unfold in it.

Coming to the man of the moment, if you trace the trajectory of Aamir Khan’s fascinating career, his film choices have mostly been driven by life nuggets and his unflinching political stance. Zindagi jeene ke do hi tarike hote hain…in Rang De Basanti or him likening life to pani puri in LSC — Zindagi golgappe ki tarah hoti hai. Pait bhale hi bhar jaaye, mann nahi bharata. Despite the boycott brigade, the actor speaks through his characters and advocates humanity over religion here. His drive to take on a celebrated role in his late 50’s, which Hanks played in his late 30’s is commendable. However, though evocative in portions and painstakingly done, he tries a bit too hard and the result is a tad extra. His constant pauses, de-aging and ‘hmmms’ feel more like an interruption. He seems too consumed with his own act to connect with others. You want him to drop the character excess a bit and keep it simple, something that Kareena manages to crack. She is beautifully restrained as Rupa aka Forrest’s Jenny. She displays shades of a sad Geet and wiser version of Madhur Bhandarkar’s Heroine, weaving it all together, hitting the right notes and striking a fine balance between involvement and detachment. Mona Singh exudes just the right amount of courage and compassion for her character. However, an actor who moves you the most is Manav Vij (remember Lieutenant Dan?). It’s he who gets the tone of Forrest Gump right.

Shot extensively across India, director Advait Chandan enters Rajkumar Hirani’s warm, funny and provocative satire space and succeeds partially. He creates a faithful but lengthy adaptation (2 hours 40 minutes) that makes a clever commentary on India’s political landscape. The film may not be as effortlessly moving or immersive as the original but it will make you want to see it with your family. At a time of evolving culture, LSC holds onto the good old values that make it worthy of a family outing. You will particularly remember a crackling Shah Rukh Khan cameo and heartwarming special appearance by Kamini Kaushal.