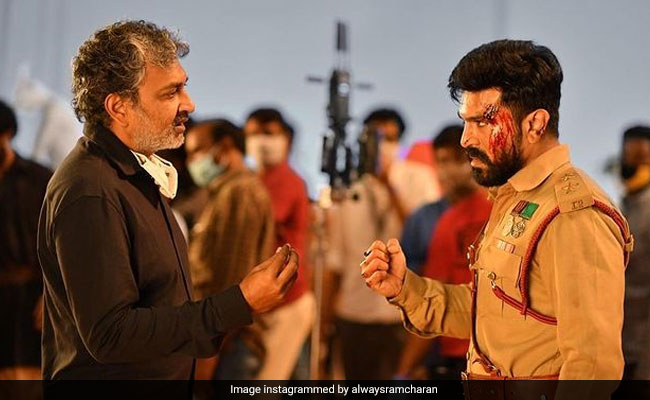 SS Rajamouli‘s RRR [Rise, Roar, Revolt] has won a million hearts. Be it the portrayal of larger-than-life characters or the peppy songs, the Jr NTR and Ram Charan starrer is a treat to watch. The jaw-dropping action sequences have managed to keep the audience on the edge of their seats. After, it’s a Rajamouli directorial we are talking about. And, now, to everyone’s delight, Ram Charan has come up with a behind-the-scenes snapshot from the sets of RRR. In the frame, Rajamouli and Ram Charan are discussing the scene. In the sidenote, Ram Charan said, “Shot during one of my favourite episodes.”

RRR also stars Ajay Devgn and Alia Bhatt in cameo roles. Ajay Devgn’s Venkata Rama Raju is considered to be the soul of the film. Alia Bhatt plays Sita. She is Ram Charan’s love interest in the film.

Earlier, Jr NTR had penned a long note for his co-stars and fans for making RRR a huge success. He wrote, “All of you heaped praises on RRR and showered us with love since the film’s release. I would like to take a moment to thank everyone who made RRR, a landmark film in my career, possible.”

Thanking SS Rajamouli for bringing out the best in him, Jr NTR said, “Thank you, Jakkanna (Rajamouli), for inspiring me to give my best. You truly brought out the best in me and made me feel like water, versatile. You pushed me as an actor and made me mould into my character and all his layers with great ease and conviction.”

RRR was released on March 25. Olivia Morris, Alison Doody and Ray Stevenson are also part of the project.