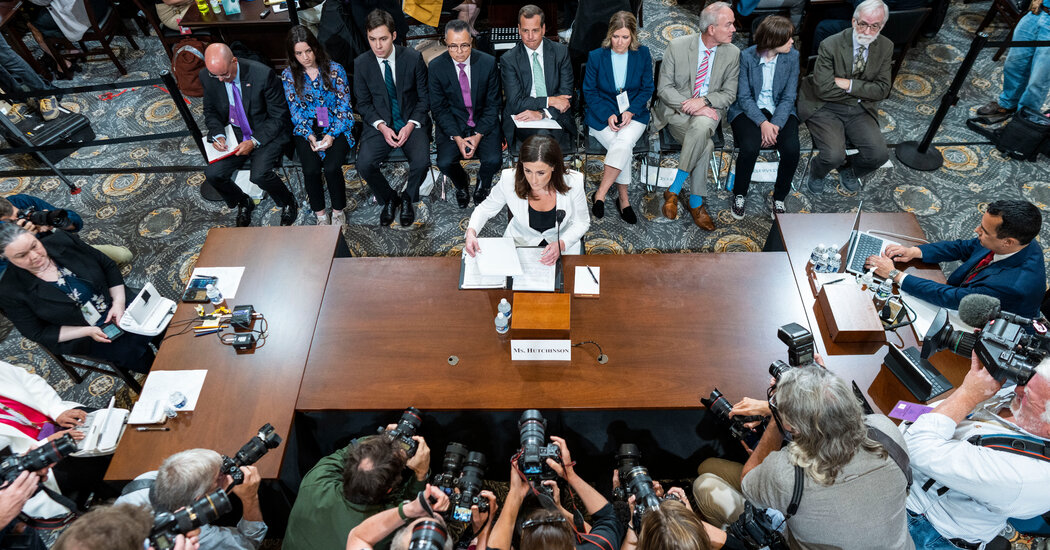 WASHINGTON — The surprise hearing on Tuesday of the special House committee investigating the Jan. 6 attack lived up to the drama that preceded it, providing the most detailed and intimate picture yet of President Donald J. Trump’s actions as a mob was assaulting the Capitol in his name.

The explosive and cinematic firsthand testimony from Cassidy Hutchinson, a trusted longtime aide of Mark Meadows, the White House chief of staff, portrayed the president as almost unhinged with fury when his Secret Service detail told him he could not go to the Capitol as his supporters, many of them armed, descended on it. Ms. Hutchinson said Mr. Trump knew of the threat of violence by his supporters but was unconcerned by it, since they were not targeting him; and that he sympathized with them as they chanted for the execution of Vice President Mike Pence, who had refused his entreaties to overturn the election. And she testified that senior aides had tried in vain to persuade Mr. Trump to call off the mob, but he resisted for hours. Her testimony was replete with stunning revelations.

‘They are not here to hurt me.’ Trump encouraged an armed mob to go to Capitol Hill.

Upset that the crowd at his rally on Jan. 6, 2021, didn’t fill the cordoned-off space on the Ellipse, a furious Mr. Trump ordered security officials to allow people milling outside the security perimeter into the space so the event would appear well attended. Informed that some of those people were standing outside because they had weapons and didn’t want to pass through metal detectors, the president urged that they be allowed in anyway.

“They are not here to hurt me,” he said, according to Ms. Hutchinson, who was within earshot of the president at the time. Using a string of expletives, she testified, Mr. Trump said he wanted the security features removed. She also said the president had been told that the crowd of his supporters were threatening violence and had come armed including with guns, knives, spears and flagpoles, and wearing body armor. Mr. Trump encouraged them to go to the Capitol anyway, a detail that could prove legally problematic for him.

Trump refused to call off the mob.

Ms. Hutchinson provided sworn testimony of an accusation that the panel has alluded to previously — that, despite the violence at the Capitol and the threats to Vice President Mike Pence, Mr. Trump refused repeated exhortations from his staff to intervene. Responding to a series of appeals from Pat Cipollone, the White House counsel, Mr. Meadows said that Mr. Trump was not inclined to try to call off the mob, according to Ms. Hutchinson’s account. “He doesn’t want to do anything,” Mr. Meadows told the White House lawyer when informed that violence was breaking out. Mr. Cipollone tried a second time, noting that the mob was chanting, “Hang Mike Pence.”

“You heard him, Pat, he thinks Mike deserves it,” Ms. Hutchinson said Mr. Meadows responded. “He doesn’t think they are doing anything wrong.”

Trump had bouts of fury.

Mr. Trump was prone to rage as his attempts to get the election results overturned fell on deaf ears in his administration.

Upon learning on Dec. 1 that Attorney General William P. Barr had publicly declared the allegations of widespread voter fraud unfounded, Ms. Hutchinson said Trump slammed his lunch against a wall in his dining room in the White House, as she learned from the valet who cleaned up the broken china and ketchup dripping down the wall.

“There were several times throughout my tenure with the chief of staff that I was aware of him either throwing dishes or flipping the tablecloth to let all the contents of the table go on to the floor and likely break or go everywhere,” she said of the president.

Ms. Hutchinson said she had been told that on Jan. 6, an irate Mr. Trump, when informed he could not go to the Capitol to join his supporters, sought to wrench the steering wheel away from the Secret Service agent driving him. He continued to press to head there even after they returned to the White House.

Mr. Meadows and Rudolph W. Giuliani, the former New York City mayor and Mr. Trump’s personal lawyer, both sought pardons from Mr. Trump before he left office in case they were implicated criminally in any events leading up to Jan. 6 or the assault itself. As she closed her testimony, Ms. Hutchinson stated very clearly that her former boss had joined Mr. Giuliani in asking for a pardon, though neither was granted one. Just their interest in obtaining clemency demonstrated they were worried about the potential consequences from their efforts on the president’s behalf.

She also testified that at one point, Mr. Cipollone said he had serious concerns about what Mr. Trump had planned that day, including his desire to march to the Capitol. “We’re going to get charged with every crime imaginable,” Ms. Hutchinson quoted Mr. Cipollone as saying.

Members of the president’s Cabinet were distressed enough by the assault on the Capitol and the president’s encouragement of the mob and refusal to intervene that they quietly discussed invoking the 25th Amendment to remove him from office, Ms. Hutchinson testified. The ignominious prospect of being the first president to be subject to the amendment was one of the reasons he agreed to record a video on Jan. 7 committing to a peaceful transfer of power.

The panel believes Trump is discouraging cooperation with its inquiry.

Members of the committee are hoping that Ms. Hutchinson’s willingness to come forward and provide such significant testimony will encourage others still holding back to do the same.

“To that group of witnesses, if you’ve heard this testimony today and suddenly you remember things you couldn’t previously recall, or there’s some details you’d like to clarify, or you discovered some courage you had hidden away somewhere, our doors remain open,” Representative Bennie Thompson, Democrat of Mississippi and chairman of the committee, said.

Representative Liz Cheney, Republican of Wyoming and vice chairwoman of the committee, suggested the panel had learned of attempts by Mr. Trump and his allies to influence witnesses and would be considering a response to such efforts.