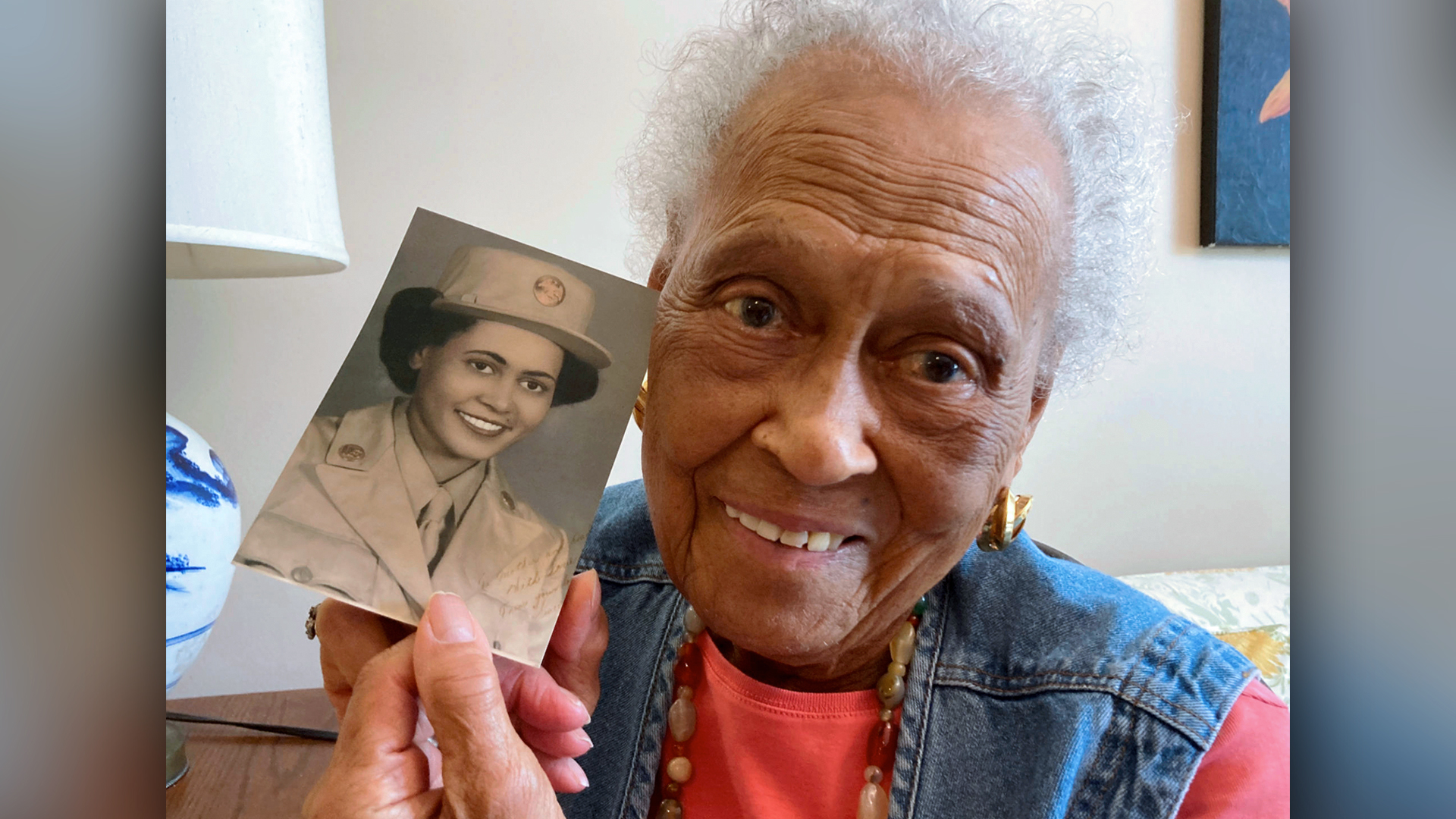 MONTGOMERY, Ala. (AP) — Millions of letters and packages sent to U.S. troops had accumulated in warehouses in Europe by the time Allied troops were pushing toward the heart of Hitler’s Germany near the end of World War II. This wasn’t junk mail — it was the main link between home and the front in a time long before video chats, texting, or even routine long-distance phone calls.

The job of clearing out the massive backlog in a military that was still segregated by race fell upon the largest all-Black, all-female group to serve in the war, the 6888th Central Postal Directory Battalion. On Tuesday, the oldest living member of the unit is being honored.

Romay Davis, 102, will be recognized for her service at an event at Montgomery City Hall. It follows President Joe Biden’s decision in March to sign a bill authorizing the Congressional Gold Medal for the unit, nicknamed the “Six Triple Eight.”

Davis, in an interview at her home Monday, said the unit was due the recognition, and she’s glad to participate on behalf of other members who’ve already passed away.

“I think it’s an exciting event, and it’s something for families to remember,” Davis said. “It isn’t mine, just mine. No. It’s everybody’s.”

The medals themselves won’t be ready for months, but leaders decided to go ahead with events for Davis and five other surviving members of the 6888th given their advanced age.

Following her five brothers, Davis enlisted in the Army in 1943. After the war the Virginia native married, had a 30-year career in the fashion industry in New York and retired to Alabama. She earned a martial arts black belt while in her late 70s and rejoined the workforce to work at a grocery store in Montgomery for more than two decades until she was 101.

While smaller groups of African American nurses served in Africa, Australia and England, none matched the size or might of the 6888th, according to a unit history compiled by the Pentagon.

Davis’ unit was part of the Women’s Army Corps created by President Franklin D. Roosevelt in 1943. With racial separation the practice of the time, the corps added African American units the following year at the urging of First Lady Eleanor Roosevelt and civil rights leader Mary McLeod Bethune, according to the unit history.

More than 800 Black women formed the 6888th, which began sailing for England in February 1945. Once there, they were confronted not only by mountains of undelivered mail but by racism and sexism. They were denied entry into an American Red Cross club and hotels, according to the history, and a senior officer was threatened with being replaced by a white first lieutenant when some unit members missed an inspection.

Working under the motto of “No Mail, Low Morale,” the women served 24/7 in shifts and developed a new tracking system that processed about 65,000 items each shift, allowing them to clear a six-month backlog of mail in just three months.

“We all had to be broken in, so to speak, to do what had to be done,” said Davis, who mainly worked as a motor pool driver. “The mail situation was in such horrid shape they didn’t think the girls could do it. But they proved a point.”

A month after the end of the war in Europe, in June 1945, the group sailed to France to begin working on additional piles of mail there. Receiving better treatment from the liberated French than they would have under racist Jim Crow regimes at home, members were feted during a victory parade in Rouen and invited into private homes for dinner, said Davis.

“I didn’t find any Europeans against us. They were glad to have us,” she said.

The 6888th previously was honored with a monument that was dedicated in 2018 at Buffalo Soldier Military Park at Fort Leavenworth, Kansas. But immediately after the war, members returned home to a U.S. society that was still years away from the start of the modern civil rights movement with the Montgomery Bus Boycott in 1955.

U.S. Sen. Jerry Moran of Kansas helped shepherd the bill to present the Congressional Gold Medal to the members of the unit.

“Though the odds were set against them, the women of the Six Triple Eight processed millions of letters and packages during their deployment in Europe, helping connect WWII soldiers with their loved ones back home, like my father and mother,” Moran said in a statement earlier this year.